Today in History: The Discovery of Helium 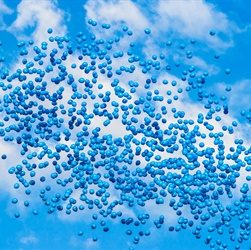 On this day in 1868, the French astronomer Pierre Jules Cesar Janssen was the first to observe the element of helium in space, before it had ever been observed on Earth.

However, despite all of his globe-trotting expeditions, Janssen’s greatest discovery was outside of our atmosphere. On 18 August 1868, while observing the great Indian eclipse at Guntur, he spotted a bright yellow line in the spectrum of the Sun’s chromosphere (the second of the three layers of its atmosphere), with a unique wavelength of 587.49 nm; a couple of months afterwards, on 20 October 1868, Joseph Norman Lockyer independently spotted that same line. He concluded that because this particular spectral line had never been seen before, it must show an unknown element, and he called it helium after “helios,” the Greek word for “sun.”

Comments Off on Today in History: The Discovery of Helium