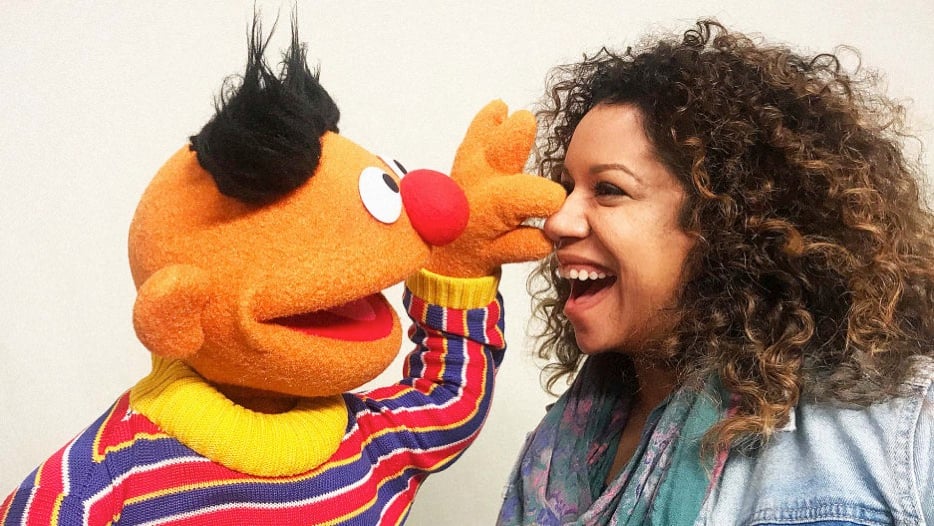 Digital design director Breonna Rodriguez talks to Doreen Lorenzo about the biggest challenge of working at Sesame Workshop, the particulars of designing for toddlers, and why it’s a great time to be a woman.

Breonna Rodriguez is the digital design director at Sesame Workshop. She spoke to Doreen Lorenzo for Designing Women, a series of interviews with brilliant women in the design industry.

Doreen Lorenzo: How did you end up at Sesame Workshop?

Breonna Rodriguez: I have always been designing for as long as I can remember. My parents were constantly asking me, “Where’s the tape,” or, “Where’s the scissors?” I was just always making things. I even remember one day . . . I think I was about 8 . . . when I decided that I wanted to start driving next to my mom whenever she was in the car (as if I could do such a thing). So, I went into my dad’s office and I grabbed two storage box lids, a bunch of paper and tape, and just made my own steering wheel and driving pedals. The next day, before we left for my grandmother’s house, and I waltz out of my room, all proud with my cardboard. And my mom sees me and asks, “What is this?” just cracking up. She still talks about it to this day. In some way, shape, or form, I’ve always just been a designer.

DL: Does working with children change the design problem?

BR: Digital products for toddlers are definitely designed differently than for adults. For instance, you can’t use words, because toddlers can’t read. So your iconography, your usability, it all has to be on point. And they also physically use devices differently. Their tiny arms and hands usually mean they’re placing the iPad on a flat surface and leaning on it with their wrists. So we avoid using navigation and buttons on the lower third of a device, so the child’s experience isn’t interrupted accidentally. So, it’s little things like that; just supporting our design decisions with a lot of research on how a child prefers to use technology.

DL: Do you do testing? How did you learn all this?

BR: Sesame Workshop has always been a company that’s steeped in research. So when I came in, the basic rules for designing for toddlers were pretty well-established. But coming from an agency background, I was able to find ways to push the brand to take more risks, but only once I understood the research. For instance, we used to be very into making buttons look physically like buttons you’d see in the real world. Our research had shown that was a very important visual cue that helped a child know the element on the page could be interacted with. But this was also around the same time flat design became a leading trend in design. And after waiting two years, I was able to make the argument to upgrade the realistic button style to match the trend. By then, flat design was the only design a toddler was familiar with since every icon in their parent’s iPhone carried that design style. So, we began to experiment, and it totally worked. Kids knew exactly what to do. Even though a lot of research is just well known, over time you still have to iterate and you play with it to sync up with the rest of world around you.

DL: Tell me about some projects you’ve worked on that made you smile.

BR: I love SesameStreetinCommunities.org. It’s a platform specifically for parents and providers (like caregivers, grandparents, social workers, medical professionals) with tools to help families navigate the milestones within a child’s development. The site has just so many tips, games, and videos that are fascinating and helpful. Hands down, my favorite project.

DL: I would imagine Sesame Street is one of the few brands people have immediate warm feelings for. What are some of the challenges with designing for such a nostalgic brand?

BR: The biggest thing with having such a fluffy brand that everyone loves is the way that people remember it. It’s so personal to everyone. And sometimes people want to design for their memory of the brand, but not necessarily for the brand we are today. For example, sometimes we will work with an outside agency, and they will send me something with a ton of the characters all over the design. And we laugh because we totally get it–it’s hard not to get carried away when you have a high-res photo of Big Bird and the Count and Cookie Monster to play with. You almost build room for that magic to happen in the schedule, so a vendor can get it out of their system, experience the joy, and then get back to designing for the actual task at hand. Which usually only requires one of the characters, not all of them. It’s really heartwarming to watch.