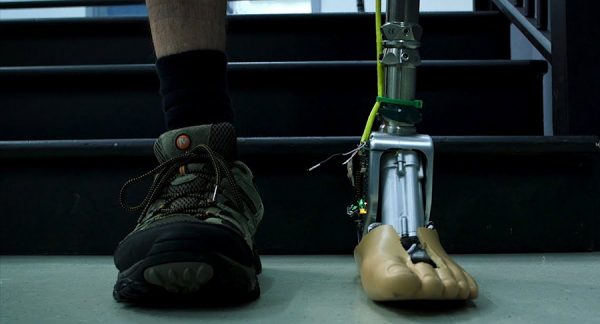 While prosthetic limbs are getting better and more personalized, they are still a far cry from the real thing. The Vanderbilt University lab of Michael Goldfarb, PhD, has completed testing of a smart prosthetic ankle which is a little closer than others; it moves on its own, adapting to its user’s gait and the surface on which it lands.

The motor, actuator, sensors, and chips of the ankle work together to either conform to the surface the foot is contacting or remain stationary, depending on the user’s needs. The research team hopes to commercialize the ankle within about two years.

Dr. Goldfarb said the problem with finding workable prosthetic ankles is so pervasive that many amputees only wear one type of shoe – whichever one works best with their prosthetic.

“Our prosthetic ankle is intelligent, so you can wear a dress shoe, a running shoe, a flat—whatever you’d like—and the ankle adapts,” said Michael Goldfarb, the H. Fort Flowers Professor of Mechanical Engineering; professor of electrical engineering and physical medicine and rehabilitation; and co-director of the Center for Rehabilitation Engineering and Assistive Technology at Vanderbilt. “You can walk up slopes, down slopes, up stairs and down stairs, and the device figures out what you’re doing and functions the way it should,” said Goldfarb who’s perhaps best known for working on a bionic leg with shark attack victim Craig Hutto and later developing the world’s first easily portable, wearable robot – the Indego exoskeleton.