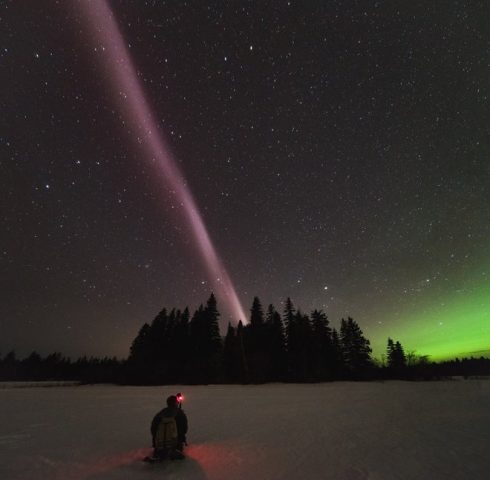 Late at night on July 25, 2016, a thin river of purple light slashed through the skies of northern Canada in an arc that seemed to stretch hundreds of miles into space. It was a magnificent, mysterious, borderline-miraculous sight, and the group of citizen skywatchers who witnessed it decided to give the phenomenon a fittingly majestic name: “Steve.”

Given its coincidence with the northern lights, Steve was just thought to be part of the aurora — the shimmering sheets of nighttime color that appear in the sky when charged plasma particles streak out of the sun, sail across space on solar winds and jolt down Earth’s magnetic field toward the planet’s poles. However, a new study published today (Aug. 20) in the journal Geophysical Research Letters suggests that such a simple explanation might not apply. [Aurora Images: See Breathtaking Views of the Northern Lights]

According to researchers at the University of Calgary in Canada and the University of California, Los Angeles, Steve does not contain the telltale traces of charged particles blasting through Earth’s atmosphere that auroras do. Steve, therefore, is not an aurora at all, but something entirely different: a mysterious, largely unexplained phenomenon that the researchers have dubbed a “sky glow.”

Comments Off on Meet “Steve,” the Mysterious Sky Glow