The History of a Machine for Resuscitating Canaries 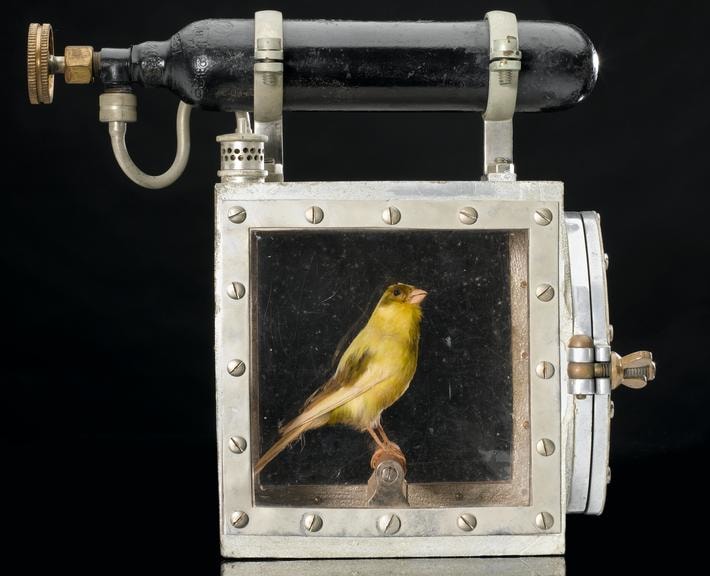 One of the world’s most beautiful objects, it’s a resuscitator for canaries used in England’s coal mines.

One of humankind’s most unlikely powers is our ability to give life, (perhaps equally as unlikely as is our occasional will to protect it). Among the many objects and technologies intended for this purpose, one stands out for its rarity. It’s a machine dating from 1896 and intended to resurrect the canaries within the coal mines of England. A strange artifact, it’s currently in the Museum of Science and Industry in Manchester, England, and it bears witness to the close and unexpected relationship which existed, for some time, between coal miners and canaries.

For almost a century – between 1890 and 1980 – English miners used canaries in the mines to detect the presence of toxic gases, among them carbon monoxide which is completely imperceptible to humans. The birds are especially sensitive to the emissions generated, frequently, after explosions or fires inside the mines. When such a disaster occurred, rescuers descended into the mines with a canary in a cage. Any sign of affectation in the bird was a signal to evacuate the mine.

The effect was discovered by one John Haldane in 1896. When consulted to determine the causes of an explosion in a mine in Wales, Haldane determined that the disaster had been caused by an accumulation of gases. He inaugurated the custom of carrying canaries into the mines, a practice which is, incidentally, regrettable.

Also invented at this time, though, was the canary resuscitator. A kind of fish tank made of metal and glass, its circular door was left open when it was brought into the mine. This opening was fenced to prevents the bird’s escaping, but if the canary showed signs of poisoning, the circular door was immediately closed and oxygen was injected by a valve from a tank placed on top of the case, to revive the bird.

The cruel practice of bringing canaries into the mines continued for almost 100 years, when in the 1980s, the canaries were finally replaced by technology. Despite the desolation of the custom, it’s encouraging that someone once took the time to invent an object to protect, at least minimally, these animals. This is not a surprise because many miners are known to have developed a special affection for their winged companions. The canary resuscitator is thus not just a rarity. It’s an object which embodies an inadvertent act of atonement for these most delicate of birds.

Comments Off on The History of a Machine for Resuscitating Canaries