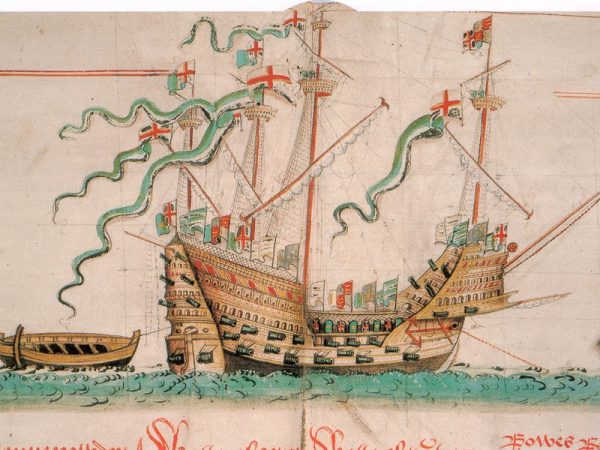 If you know a bit about English naval history or maybe watched The Tudors then you know about the Mary Rose. Either way, this Smithsonian article dives (pun is definitely intended) into what conservators are doing to restore Henry VIII’s prized vessel.

In July 1545, the flagship vessel of Henry VIII’s fleet met an ignominious end. Locked in a stalemate at the Battle of Solent, England and its perennial enemy, France, were exchanging cannonfire when the Tudor king’s prize ship, the Mary Rose, began to keel over. As Henry watched in horror, the vessel careened toward the bottom of the English Channel, drowning all but 34 of its nearly 500-men crew.

Some 400 years later, divers discovered the wreck of the Mary Rose submerged in layers of silt. According to History Extra, the ship was remarkably well preserved, yielding everything from wooden dishes to lice combs still covered in nits. Researchers raised the Mary Rose from its watery grave in 1982, paving the way for its conservation and exhibition to the public, but in recent years, steady deterioration sparked by centuries spent underwater has threatened to destroy the historical goldmine.

Still, the Mary Rose isn’t doomed just yet. As Matthew Taub writes for Atlas Obscura, scientists from the University of Glasgow in Scotland, the University of Warwick in England and the Mary Rose Trust have developed a new technique that halts the decay of salvaged shipwrecks’ wooden structures. The process, detailed in a presentation at this week’s 256th National Meeting & Exposition of the American Chemical Society, uses nanoparticles—miniscule magnetic particles measuring just a thousandth of the width of a strand of human hair—to remove the iron ions responsible for a vessel’s decay.