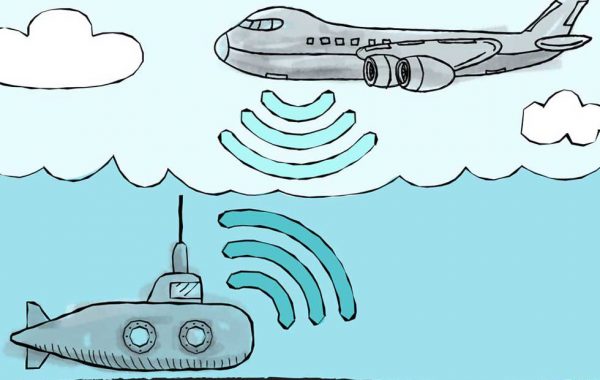 MIT researchers have designed a new system that is meant to overcome a longstanding challenge with communication between the air and beneath the water. Wireless underwater sensors are currently unable to share data with sensors on land because the signals able to travel through the air dissipate quickly in the water. At the same time, acoustic signals (sonar) signals sent by underwater devices reflect off the surface of the water without breaking through.

Those facts cause problems in communicating data from underwater exploration or sub to aircraft communications. MIT Media Lab has designed a new system that overcomes that problem. In the system, an underwater transmitter directs a sonar signal at the surface of the water where tiny vibrations are made that corresponds to the 1s and 0s that is being transmitted in the data.

Above the surface of the water, a highly sensitive receiver can read those tiny vibrations and turn the transmission into usable data. The system is called translational acoustic-RF communication or TARF and is still in the early stages of development. Scientists say that despite its early stages, the system is still a milestone and has the potential to open new capabilities in communicating with aircraft from the water.