How Tupperware became a $2 billion brand 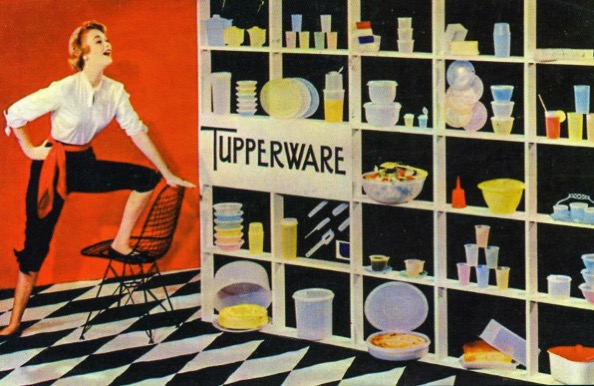 Earl Tupper, inventor of Tupperware products, saw such promise in polyethylene – the plastic he used to craft his inventions – that he called it “Poly-T: Material of the Future,” as Alison J. Clarke notes in her book “Tupperware: The Promise of Plastic in 1950s America.”

After failing at his first business as a tree surgeon, Tupper decided to try his hand at plastics production. In 1937, he got a gig as a sample maker at a Dupont-affiliated plastics factory.

At the time, DuPont employed amateur sample makers to further research and development. They could even take scrap materials home with them to work on new prototypes – a mutually beneficial arrangement, Clarke points out.

So when working with injection molding machines at the factory failed to yield the plastic Tupper envisioned, he turned to his home kitchen and tried the stovetop.

IT’S ALL ABOUT THE LID

The polyethylene that Tupper brought home from the factory was an industrial waste product – opaque, greasy, clumpy black slag. It was hardly the stuff that marketing dreams are made of. Tupper sought to overcome such material limitations by producing a plastic more durable than molded transparent styrene; he wanted to create something that could flex without cracking or snapping.

He and his son boiled the scrap samples at home, eventually finding the right balance of pressure and temperature so the polyethylene flowed into the desired shapes and thickness. Tupper also fashioned a system for dyeing his containers in pastel colors.

Eventually, Tupper was able to create what author Bob Kealing referred to as “a polished, waxy, upscale plastic.”

But he still needed the right lid – something that could both preserve food and prevent spills.

Inspired by paint cans, Tupper fashioned a flexible polyethylene lid that, when snapped onto the container, created an airtight seal. As Kealing points out, this worked much better than tin foil or a shower cap – materials many American women had relied on to cover their leftovers.

In 1947, Tupper patented the nonsnap lid for his first plastic container.

Legendary saleswoman Brownie Wise – the first woman to appear on the cover of Business Week – would demonstrate how to “burp” the container by lifting part of the patented lid before sealing it. Her direct sales acumen made Tupper’s product come alive. At her iconic “Tupperware parties,” she would toss liquid-filled Wonder Bowls across American living rooms, astonishing housewives with the airtight seal that prevented spills.

Comments Off on How Tupperware became a $2 billion brand