MB&F’s ‘Grant’ is a Robot-Transformer Clock 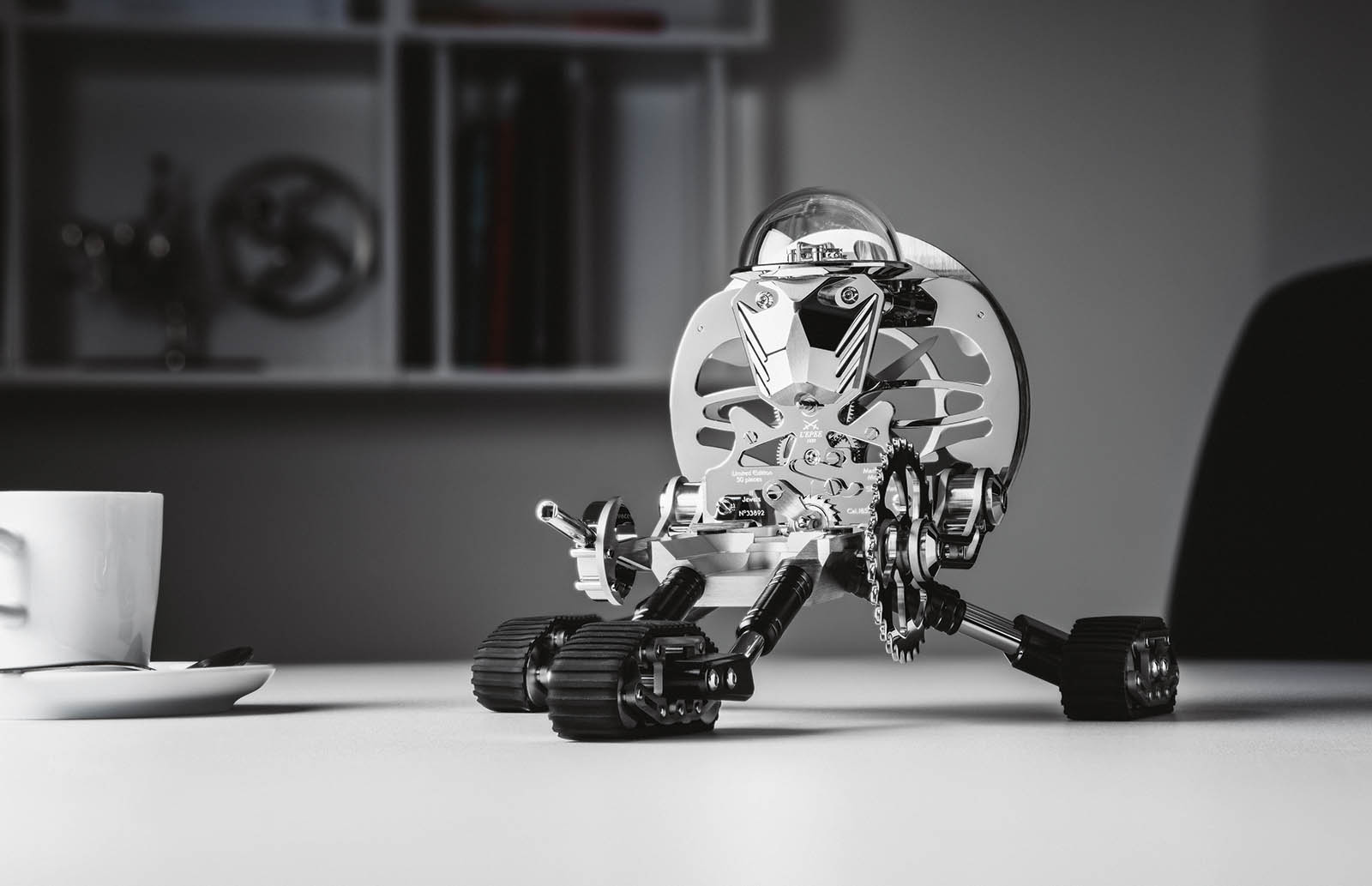 The ‘transformation’ is performed manually, as seen in the video below, but still, look at that thing – it’s a beaut!

The extraordinary imagination of MB&F has produced some of the most elaborate timekeeping contraptions, from spaceships to creepy crawlies. Needless to say, robots have been a recurring subject, starting with the brand’s first clock, Melchoir, and continuing with the schizophrenic Balthazar to the benevolent Sherman. And now MB&F has introduced Grant, a robot clock sitting on three wheeled tracks that can transform.

Named after the American M3 Lee “Grant” tank of the Second World War, the compact but weighty 2.34kg clock is designed by MB&F and once again built by Swiss clockmaker L’Epée 1839. Fashioned from steel, nickel-plated and palladium-plated brass, Grant stands on three continuous rubber tracks and is made from 268 components.

Read more at watches by SJX, watch the video below for some behind-the-scenes fabrication shots:

MB&F and L’Epée 1839 present Grant, a triple-tracked, Mad-Max-cross-Transformer robot clock on a mission. In today’s fast-paced, always-on, 24/7 world, we are under constant bombardment from time: seconds race by; there is never enough; everyone wants more; and it keeps getting faster and faster. The nearest hour was once precise enough; now the world’s most accurate clocks are better than a second over the entire age of the universe!

No wonder you are stressed, but relax, help is at hand. Grant is here. Grendizer meets Mad Max meets Transformer.

Grant is a robot with a time display on his shield and a mission to slow things down when time runs too fast. There are no incessantly flashing digital numerals on Grant’s shield, no constantly spinning second hand. Grant transforms frantic chaos into relaxing hours and minutes, and that’s all the time you really need.

While Grant’s time moves relatively slowly, he can travel quickly over rough terrain (or the messiest desk) on his three operational rubber tracks. Grant can also transform into one of three different modes: lying horizontally over his chassis for a low profile; crouching at 45 degrees; and sitting up 90 degrees. Grant’s time shield can always be set to a comfortable and optimal viewing angle.

Whatever the angle, Grant’s highly polished clockwork is on full display, and you can follow every click and turn of the gears. The mainspring barrel click near his ‘belly button’ is particularly mesmerizing in operation. The isochronal oscillations of the regulator keeping time in Grant’s glass-domed ‘brain’ are evidence of the clockwork’s high precision. Watching Grant “thinking” in real time is a stress-relieving activity in itself: Grant transforms time so that you can relax and enjoy it.

Grant’s 8-day, in-line manufacture movement features the same superlative fine finishing as found on the finest wristwatches: Geneva waves, anglage, polishing, sandblasting, plus circular and vertical satin finishing. Hand finishing a clock movement is significantly more challenging than that of a wristwatch due to the larger surface areas of the clock components.

While he doesn’t look for fights, Grant believes offense is a great form of defense and packs appropriate weaponry. His left arm holds a “you-really-don’t-want-to-mess-with-me” spinning disk, while his right arm clasps a removable grenade launcher. Grant even has a surprise up his sleeve: his grenade launcher is removable and doubles as the winding and time-setting key for his 8-day clockwork, so he isn’t likely to run out of either firepower or time.

Grant is available in three limited editions of 50 pieces each in Nickel, Black, and Blue.