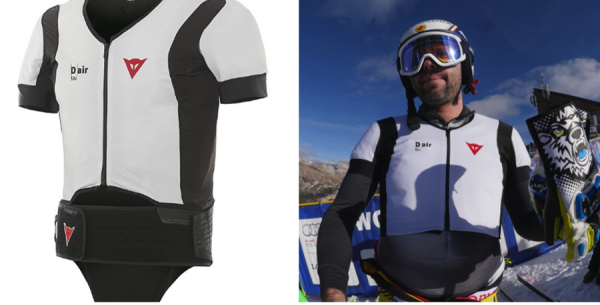 Downhill skiing is a dangerous sport. Even the most experienced skiers may get involved in a catastrophic crash. Luckily, there’s a way to protect against such accidents, thanks to the new D-air system by Dainese. The system is based on an existing airbag system Dainese developed for motorcycle racing. In 2012, the Italian company was approached by ski racing’s governing body, the International Ski Federation to adapt the suit for ski racing.

After missing its initial approval target of Sochi Olympics in 2014, D-air received approval from FIS on January, 2015. Racers from several countries, including the US Ski Team, will be able to use the system at the World Championships.

The D-air Ski is integrated in a back plate that is placed underneath a skier’s suit. The vest protects the skier’s torso and shoulders and uses a range of sensors to track speed and position. The secret behind this technology is the algorithm that decides when a crash is about to happen. Using 3 accelerometers and 3 gyroscopes, the sensors communicate via GPS at a rate of 1,000 times per second to detect an imminent crash. The vest fully inflates in 100 milliseconds if it senses a crash. A replaceable cold-gas canister provides the near-instant inflation.