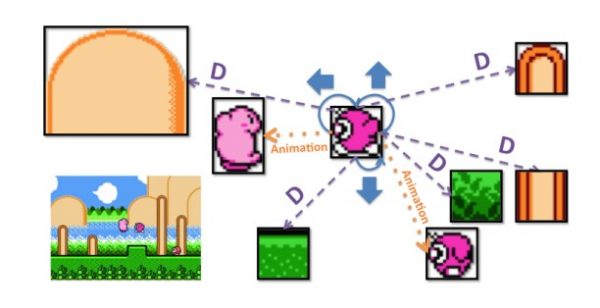 Guzdial and Riedl are co-authors of “Automated Game Design via Conceptual Expansion,” a new study designed to teach an algorithm to design its own video games. The study is the latest iteration of a long running project where Riedl, Guzdial and many others are attempting to teach AI how to be creative, often using video games.

Riedl and Guzdial fed a machine learning algorithm video of humans playing the first levels of Super Mario Bros., Kirby’s Adventure, and Mega Man for the Nintendo Entertainment System. Once the program had absorbed all of the footage, it was able to probabilistically map the relationships between in-game objects and how the relationships change to generate “game graphs” that laid out how the games worked, and which the scientists can visualize in diagram form. The pair then asked it to create its new game graphs based on what it had learned—essentially, creating new games.

“It’s the mimicry approach to creativity, which isn’t a bad place to start because humans also learn to be creative by mimicking at first,” Riedl said.