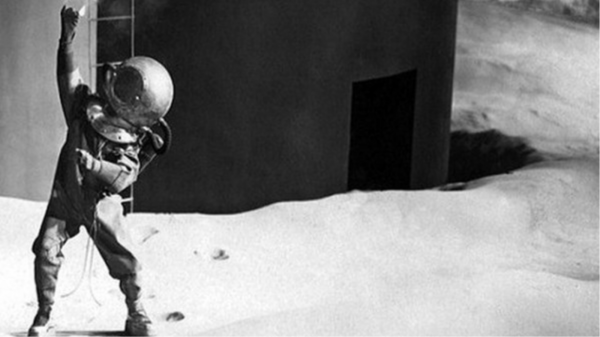 Science fiction cinema proper may have begun with A Trip to the Moon, a short silent film made in 1902 about, well, a trip to the moon. But the genre didn’t really hit its stride until almost three decades later with the release of Fritz Lang’s underrated sci-fi masterpiece Woman in the Moon in 1929.

Generally considered to be the first ‘serious’ science fiction film, Woman in the Moon was far ahead of its time and was the first time that the nascent field of rocket science was presented to the masses in popular media. It was the first film to employ a scientist as an advisor and was considered so realistic that it was banned by the Nazis for fear that it would reveal military secrets (although Lang’s Jewish heritage might also have played a role).

Woman in the Moon tells the story of Professor Mannfeldt, a renegade scientist who wrote a paper arguing that there is gold on the moon. Although he was dismissed and ridiculed by his scientific peers, his work attracts the attention of an entrepreneur named Helius as well as an enterprising group of American thugs led by a man named Walt Turner.

After Helius approaches Mannfeldt about the possibility of putting his theory to the test they agree to collaborate on designing the first journey to the moon. But on the way back from Mannfeldt’s office, Helius is mugged by Turner and his American compatriots who steal the Professor’s plans for a journey to the moon. Once Turner and his gang realize that Mannfeldt and Helius are planning to venture to the moon in search of gold, they threaten to blow up the spaceship unless they can get in on the journey.