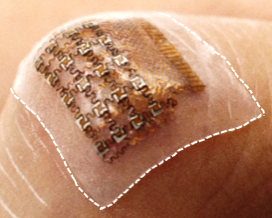 This stick-on patch may replace those bulky cuffs for taking blood pressure. Via MIT Technology Review:

The silicon elastomer patch works by sending out ultrasonic waves that penetrate the skin and reflect off the wearer’s tissues and blood. Those reflections are sent back to the sensor, and then to a laptop that processes the blood pressure data (for now, at least, the patch must be wired to a laptop and a power source, too). It is the first known wearable device that can sense deep below the surface of the skin.

In theory, the patch could be used at home to monitor patients over time. And because it’s not inserted into the body, there’s no risk of infection.

A study on Xu and his colleagues’ work, published last week in Nature Biomedical Engineering, found that the patch could continuously and accurately monitor central blood pressure when placed on different parts of the body, though putting it on the neck was most effective. In the study, they compared it to a noninvasive and useful (but hard to operate) device called a tonometer, which places a pressure sensor on the skin; the differences between the two devices’ results were a fraction of what’s considered to be the acceptable range for error with a standard blood pressure device.