Galileo’s Long-Lost Letter to the Inquisition 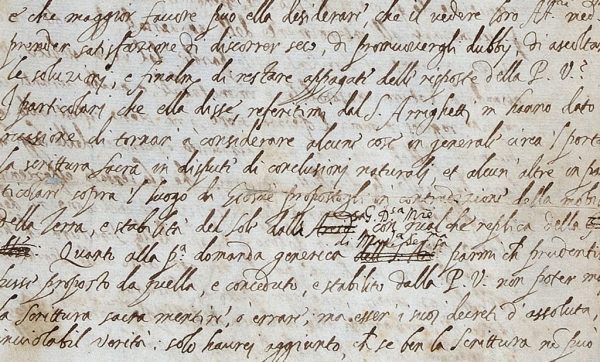 The downfall of Galileo could have been prevented with this letter. Maybe. Not really.

via Nature International Journal of Science

The seven-page letter, written to a friend on 21 December 1613 and signed “G.G.”, provides the strongest evidence yet that, at the start of his battle with the religious authorities, Galileo actively engaged in damage control and tried to spread a toned-down version of his claims.

Many copies of the letter were made, and two differing versions exist — one that was sent to the Inquisition in Rome and another with less inflammatory language. But because the original letter was assumed to be lost, it wasn’t clear whether incensed clergymen had doctored the letter to strengthen their case for heresy — something Galileo complained about to friends — or whether Galileo wrote the strong version, then decided to soften his own words.

Galileo did the editing, it seems. T﻿he newly unearthed letter is dotted with scorings-out and amendments — and handwriting analysis suggests that Galileo wrote it. He shared a copy of this softened version with a friend, claiming it was his original, and urged him to send it to the Vatican.

Comments Off on Galileo’s Long-Lost Letter to the Inquisition