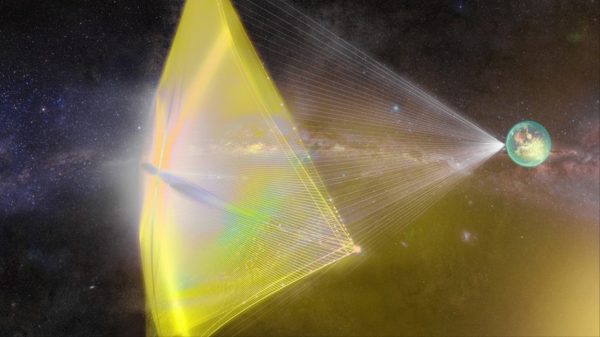 As if that isn’t mind-bending enough, scientists and artists have recently started exploring the futuristic idea of embossing holograms on the light sails. This is not just to make the sails look trippy; it’s also a potential solution to the technical challenge of stabilizing and steering the sails.

To reach their target speeds, Starshot’s sails are supposed to be blasted for several minutes by 50 to 100 gigawatts of energy provided by a laser beam on the Earth’s surface (for comparison, the average nuclear power plant produces one gigawatt, according to the US Department of Energy). But because the laser would be moving due to the rotation of the Earth, some mechanism is needed to keep the sails within the beam as it drifts; otherwise they will float out of the light, failing to accelerate.