“Made in the U.S.A.” has been in decline for decades, but in the last few years it has shown signs of an incipient comeback. Even as the number of manufacturing jobs has decreased, manufacturing output—the value of goods made here—has increased substantially. We still make $5.4 trillion worth of stuff annually here, and 12.4 million Americans still work in the manufacturing sector. But Trump administration tariffs, speculation about a trade war, and the continued march toward automation make the future of American manufacturing less certain.

For this special report, we surveyed 26 of the largest manufacturers in the country—and a few smaller ones, because their perspective is important—for their thoughts, concerns, and predictions. Their answers to 11 big questions tell us a lot about what lies ahead. 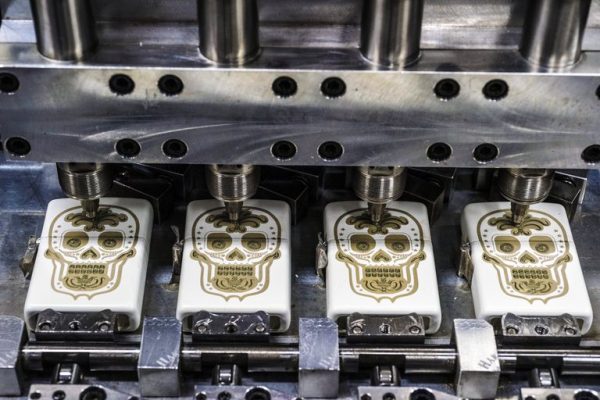 More from the article:

No. 10: How Many Robots Does a Factory Worker Interact with on a Shift?

The Consensus: Many companies suggested the number of robots in their factories is lower than you might expect. They’ve mostly taken over in places where precision is of the utmost importance—or where humans might get injured.

What the companies say:

Stihl: We are four to five times more automated than a typical U.S. manufacturer of the same size. We have about 155 robots for 2,000 employees. We also have 15 laser-guided-­vehicle forklifts that provide just-in-time automatic-assembly-line delivery. No full-time employee has ever been let go due to automation.

Nalgene: Even the bottles that are being injection-blown-molded, there’s somebody there paying attention to the machine, watching it and inspecting it. On any given run, you’re probably going to have three people there that are monitoring the process, actually touching the product.

Ford: At our Kentucky Truck Plant, we recently invested more than $900 million to build the new Expedition and Navigator. When we transformed the body shop, we added approximately 400 new robots. In general, they increase line speed while keeping employees safe from repetitive-motion injuries. The plant also added a robot lab, where employees can test out software tweaks or troubleshoot issues away from the factory floor.

Comments Off on The Future of American Manufacturing | @mfgday #MFGDay18