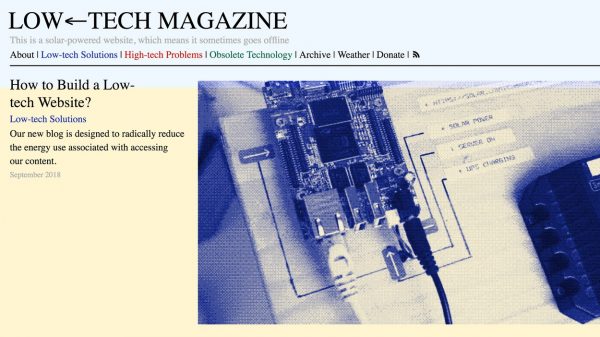 It’s taking a lot of energy for you to read this article. Your device sent a request to a server, which then sent data back to your device, conjuring up a set custom fonts, high-resolution images, and meticulously formatted text, links, and video. Modern websites also have plugins and scripts that make them much more complicated—and energy intensive—than simple, static HTML sites. The more media the server sends to your device, the more energy is used.

It’s not just Motherboard; every website and product connected to the internet would not be able to exist without a vast network of wireless routers, fiber optic cables running underground and underwater, and data centers that house the servers which bring the internet to life. Data centers in the US alone eat up 70 billion kilowatts of energy per year, according to a 2016 estimate from the Department of Energy—that’s 1.8 percent of all energy use across the country.

The internet is not ethereal, and a new project from the blog Low-Tech Magazine aims to make that issue more tangible. Low-Tech Magazine—a blog operated by Kris De Decker that has run on WordPress since 2007—launched a “Low-Tech,” solar version of the site that’s designed from the ground-up to use as little energy as possible.