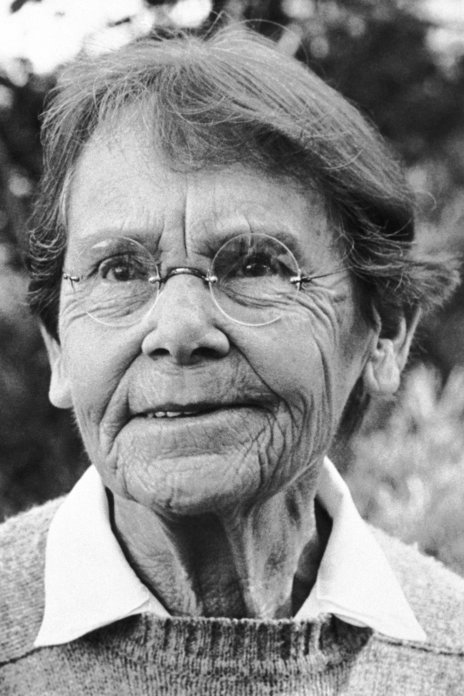 Prize motivation: “for her discovery of mobile genetic elements.”

Barbara McClintock grew up in Connecticut and New York in the United States. Her family had little money, so her interest in research was viewed with skepticism. It was more important for her to marry, her family thought. Despite this, with her father’s support, Barbara began studying at Cornell’s College of Agriculture in 1919, and her studies are where her interest remained. She never married, choosing to devote her life to research instead. She was shy and anything but a careerist, but at the same time she also realized the importance of what she had achieved, not least of all in her role as an example for other women.

Many characteristics of organisms are determined by heredity – that is, by their genes – which are stored in the chromosomes inside their cells’ nuclei. Barbara McClintock studied corn’s hereditary characteristics, for example the different colors of its kernels. She studied how these characteristics are passed down through generations and linked this to changes in the plants’ chromosomes. During the 1940s and 1950s Barbara McClintock proved that genetic elements can sometimes change position on a chromosome and that this causes nearby genes to become active or inactive.

In the fall of 1921 I attended the only course in genetics open to undergraduate students at Cornell University. It was conducted by C. B. Hutchison, then a professor in the Department of Plant Breeding, College of Agriculture, who soon left Cornell to become Chancellor of the University of California at Davis, California. Relatively few students took this course and most of them were interested in pursuing agriculture as a profession. Genetics as a discipline had not yet received general acceptance. Only twenty-one years had passed since the rediscovery of Mendel’s principles of heredity. Genetic experiments, guided by these principles, expanded rapidly in the years between 1900 and 1921. The results of these studies provided a solid conceptual framework into which subsequent results could be fitted. Nevertheless, there was reluctance on the part of some professional biologists to accept the revolutionary concepts that were surfacing. This reluctance was soon dispelled as the logic underlying genetic investigations became increasingly evident.

When the undergraduate genetics course was completed in January 1922, I received a telephone call from Dr. Hutchison. He must have sensed my intense interest in the content of his course because the purpose of his call was to invite me to participate in the only other genetics course given at Cornell. It was scheduled for graduate students. His invitation was accepted with pleasure and great anticipations. Obviously, this telephone call cast the die for my future. I remained with genetics thereafter.

Barbara McClintock was inducted into the Connecticut Women’s Hall of Fame and they shared this tribute to her on Youtube!