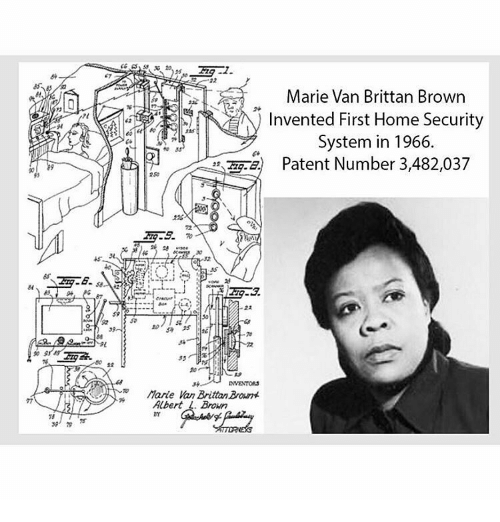 Marie Van Brittan Brown was the inventor of the home security system along with her husband! Via Wikipedia

Brown cited the inspiration for her invention as the long time it would take for police to arrive at a house after being called by residents.[1] Brown did not always feel safe when she was home alone at times, because the crime rate had risen in her neighborhood. Having to answer the door to know who was on the other side was not something Brown liked to do. Brown’s system had a set of four peep-holes and a camera that could slide up and down to look at each one. Anything and everything the camera picked up would appear on a monitor. Also, a resident could unlatch the door by remote control. The system included a device that enabled a homeowner to use a television set to view the person at the door and hear the caller’s voice.[6] The home security system that she and her husband invented allowed the monitor to be in a different room, and all of this was possible via a radio controlled wireless system. If the person viewing the images on the monitor did not feel safe they could press a button that would send an alarm to police or security. She and her husband cited other inventors in their patent, such as Edward D. Phiney and Thomas J. Reardon. Thirteen inventors who came along after Brown have cited her patent, with the latest being in 2013. Even now, over fifty years later, her invention is being used by smaller businesses and living facilities.[2]

Although the system was originally intended for domestic uses, many businesses began to adopt her system due to its effectiveness. For her invention she received an award from the National Science Committee