Susan Orlean on Growing Up in the Library 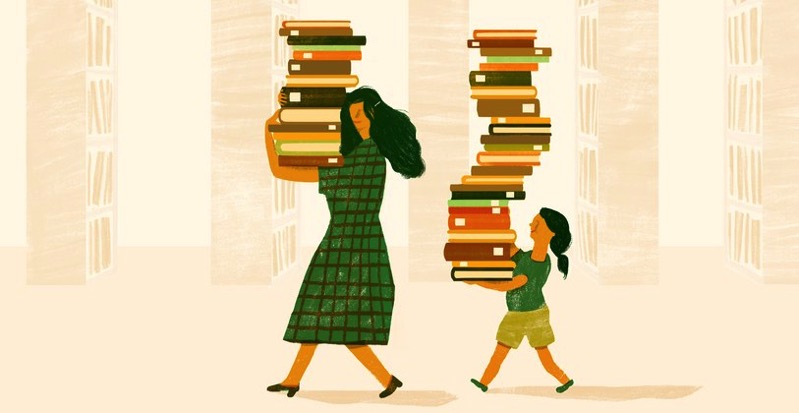 Wonderful ode to libraries from Susan Orlean in the The New Yorker.

grew up in libraries, or at least it feels that way. My family lived in the suburbs of Cleveland, about a mile from the brick-faced Bertram Woods Branch of the Shaker Heights Public Library system. Throughout my childhood, starting when I was very young, my mother drove me there a couple of times a week. We walked in together, but, as soon as we passed through the door, we split up, each heading to our favorite section. The library might have been the first place that I was ever given independence. Even when I was maybe four or five years old, I was allowed to go off on my own. Then, after a while, my mother and I reunited at the checkout counter with our finds. Together, we waited as the librarian pulled out each date card and, with a loud chunk-chunk, stamped a crooked due date on it, below a score of previous crooked due dates that belonged to other people, other times.

Our visits were never long enough for me—the library was so bountiful. I loved wandering around the shelves, scanning the spines of the books until something happened to catch my eye. Those trips were dreamy, frictionless interludes that promised I would leave richer than I arrived. It wasn’t like going to a store with my mom, which guaranteed a tug-of-war between what I desired and what she was willing to buy me; in the library, I could have anything I wanted. On the way home, I loved having the books stacked on my lap, pressing me under their solid, warm weight, their Mylar covers sticking to my thighs. It was such a thrill leaving a place with things you hadn’t paid for; such a thrill anticipating the new books we would read. We talked about the order in which we were going to read them, a solemn conversation in which we planned how we would pace ourselves through this charmed, evanescent period of grace until the books were due. We both thought that all the librarians at the Bertram Woods branch were beautiful. For a few minutes, we discussed their beauty. My mother then always mentioned that, if she could have chosen any profession, she would have chosen to be a librarian, and the car would grow silent for a moment as we both considered what an amazing thing that would have been.

Comments Off on Susan Orlean on Growing Up in the Library