How many micro:bits are out there? Two million BBC micro:bits distributed globally #microbitsecondbirthday @BBC @microbit_edu 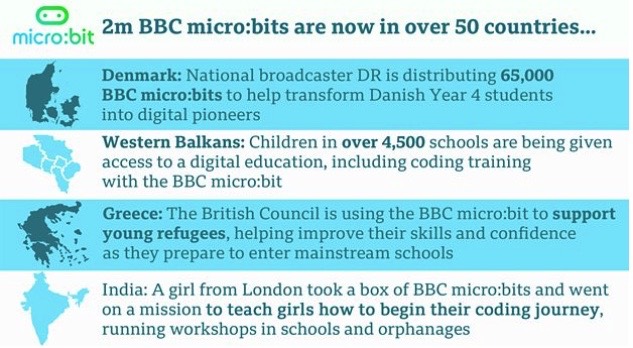 To celebrate its second birthday, the Micro:bit Educational Foundation has today announced the manufacture and distribution of the two millionth BBC micro:bit.

The Foundation has now taken the BBC micro:bit global, with the device now available in over 50 countries and large national projects in Canada, Croatia, Denmark, Hong Kong, Iceland, Uruguay and Singapore under way.

The BBC micro:bit is a pocket-sized codeable computer that allows young people to get creative with technology, whatever their level of experience. It was launched by BBC Learning in 2016 as part of the BBC’s Make it Digital initiative. It aimed to help develop a new generation of digital pioneers and it made a positive impact - with up to one million BBC micro:bits delivered for free to every year 7 student in England and Wales, year 8 student in Northern Ireland and S1 student in Scotland.

Read more. We get asked about marketshare stats all the time, so this post is a useful way to see what was happening now.

Filed under: micro:bit — by phillip torrone

Comments Off on How many micro:bits are out there? Two million BBC micro:bits distributed globally #microbitsecondbirthday @BBC @microbit_edu