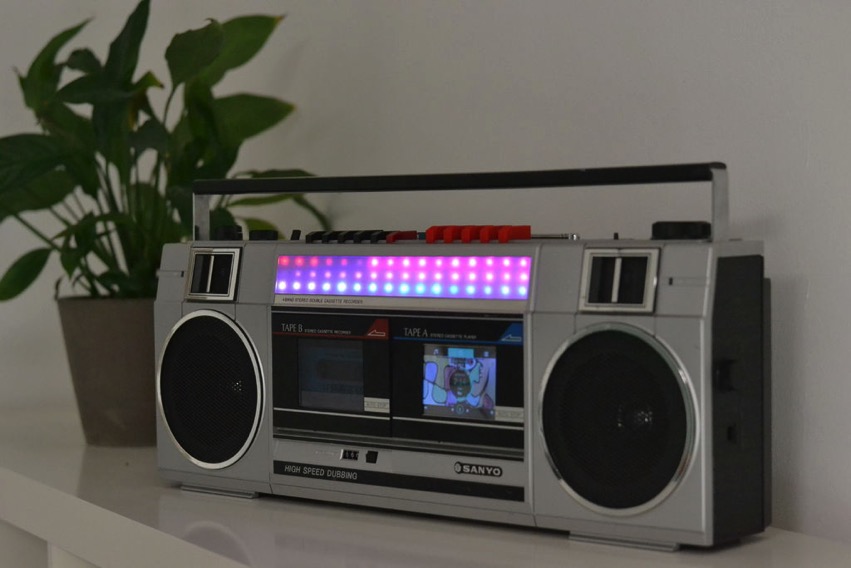 A beautifully remade boombox. I think time travelers from the 80s would be dissappointed to learn that this isn’t how everyone listens to music now. Via Instructables:

I first had the idea for this project when I came across a similar build on hackster.io which is now also published here as an instructable. In this project they remodeled a broken 80s boombox using a Raspberry Pi and replaced all electronics except for the speakers. I am also in possession of an old 80s boombox where only one of the tape decks was broken so I planned to remodel it with the following features.

I was lucky enough to find this beautiful boombox in the trash a while ago. It was fully working except for one of the tape decks which keeps eating the tape. The plan was to remove the broken tape deck an replace it with a Raspberry Pi and a 3.5″ touchscreen which fits almost exactly in the same space. For powering everything, I first thought about using 18650 batteries but then decided to just use a powerbank since it is also cheap and has the charging circuit and 3.7 V to 5 V boost converter already build-in. However, since the boombox is running on 7.5 V, I still needed another boost converter. The panel mount USB cable was used to have a micro USB socket on the housing for charging the power bank. The LED strip, Arduino Nano and resistors were used to build a spectrum analyzer. The capacitor is recommended to avoid current spikes when powering the LED strip and can also help to reduce humming noise in your speakers. Since I still ended up with a lot of humming noise, I also added a ground loop isolator. In addition, to the components above, I also used a lot of wire, hot glue and some 3D printed components.