An Exotic Form of Ice Grows at Over 1,000 Miles Per Hour 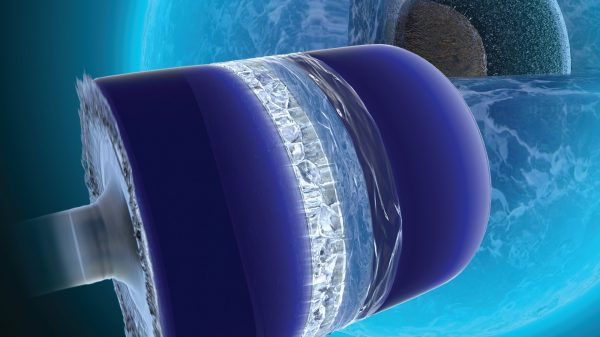 Research published earlier this month in Physical Review Letters suggests that an exotic phase of water, known as “ice VII” could grow at rates exceeding 1,000 miles per hour under the atmospheric conditions found on alien ocean worlds.

Water exists in three main phases (solid, liquid, and gas) and the phase it occupies is a function of atmospheric pressure and temperature. The solid form of water—ice—has several phases of its own, however most of them exist at extremely low temperatures (but some of them can exist at temperatures upwards of 1300 degrees fahrenheit so long as the pressure is high enough.

Ice phases are differentiated according to the shape of the atoms in the ice crystals. For example, the ice you use to cool down a drink is known as Ih. The “h” stands for hexagon, which is the shape formed by the oxygen atoms in this phase of ice. Water can be directly converted into five different ice phases (Ih, ice III, ice V, ice VI, and ice VII) out of the total 17 theoretical ice phases. Each increase in the ice number corresponds to an increase in pressure needed to form that phase.

Ice VII made headlines earlier this year when it was discovered trapped in diamonds that were formed over 400 miles beneath the Earth’s surface. This fortuitous discovery suggested that liquid water exists deep within Earth’s core, but it was also the first time that ice VII was seen outside of a lab.

Comments Off on An Exotic Form of Ice Grows at Over 1,000 Miles Per Hour