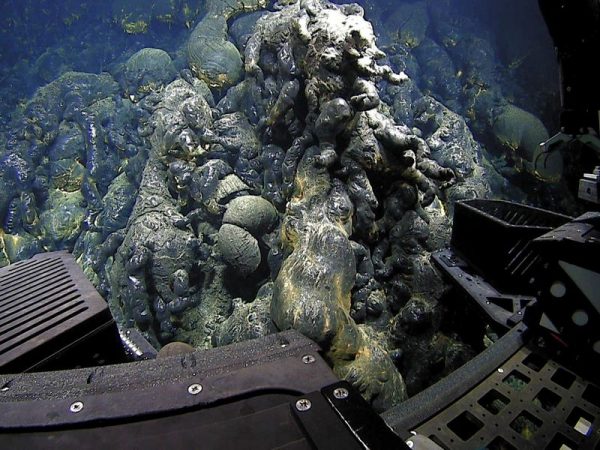 Sometime between 2013 and 2015, an underwater volcano located in the western Pacific’s Mariana Trench back-arc erupted, spewing forth a torrent of molten lava. As the sprawling tendrils hit the chilly seawater, they abruptly started cooling. The result: a nearly three-mile deep, labyrinthine network of glassy black lava that stretches roughly 4.5 miles across the ocean floor.

Researchers chanced upon this ethereal glass palace during a routine dive in December 2015, Robin George Andrews writes for The New York Times. The team had originally hoped to use robotic submersibles to uncover hidden hydrothermal vents, but the volcanic deposits proved to be a far more interesting find.

The lava labyrinth, which is newly documented in Frontiers in Earth Science, sits about 2.8 miles below the ocean’s surface. According to Eleanor Imster of EarthSky, this distance is greater than Mount Rainier’s height above sea level, officially making the eruption that produced the unusual phenomenon the world’s deepest.

Comments Off on Glass Labyrinth Created by Underwater Volcanic Eruption