So far we’ve looked at the Yamaha Tenori-on, Nine Inch Nails: “Echoplex” and next up our tour of light and sound – Originally, or prototyped as the “Bitbox (?)“… The monome – Wikipedia –

Monome is a family of interface devices for computers made by an Upstate New York company of the same name. Brian Crabtree and his partner Kelli Cain are credited for Monome’s creation. The Monome has a minimalist design, and has been complimented for its interface design. It is a box with a grid of back-lit buttons, with no labels or icons. No screws are visible on any surface of the Monome. The box that holds the Monome is made entirely of wood, usually walnut, with a clear aluminum top plate. There are three different size options for the Monome: sixteen by sixteen, sixteen by eight, and eight by eight.

Monome devices do not produce any sound on their own; they must be connected to a computer via USB, in which an app affords use to the device. The creators of Monome said: “The wonderful thing about this device is that is doesn’t do anything really… It wasn’t intended for any specific application. We’ll make several applications, and others will make more. We hope to share as many of these as possible.”  A core design principle of the Monome is that it is not intended for any one specific application — the function of each button and the decision as to which lights are lit are completely up to the software communicating with the device over the Open Sound Control protocol. The Monome is not strictly a musical device. Depending the software used, the Monome can function as anything from a sample cutter to a math machine. 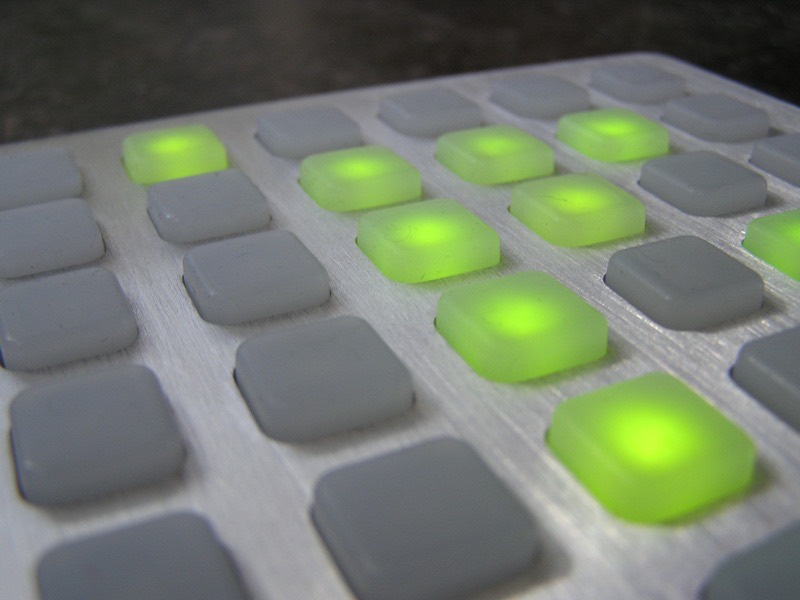 we aim to refine the way people consider interface.

we seek less complex, more versatile tools: accessible, yet fundamentally adaptable. we believe these parameters are most directly achieved through minimalistic design, enabling users to more quickly discover new ways to work, play, and connect. we see flexibility not as a feature, but as a foundation.

we strive for economic and ecological sustainability. careful design standards enable us to contribute both to culture and the environment by choosing local, high-quality, and responsible providers and production facilities. we acknowledge that our future will depend on our ability to support and maintain a regenerative economy.

we are a collective community. 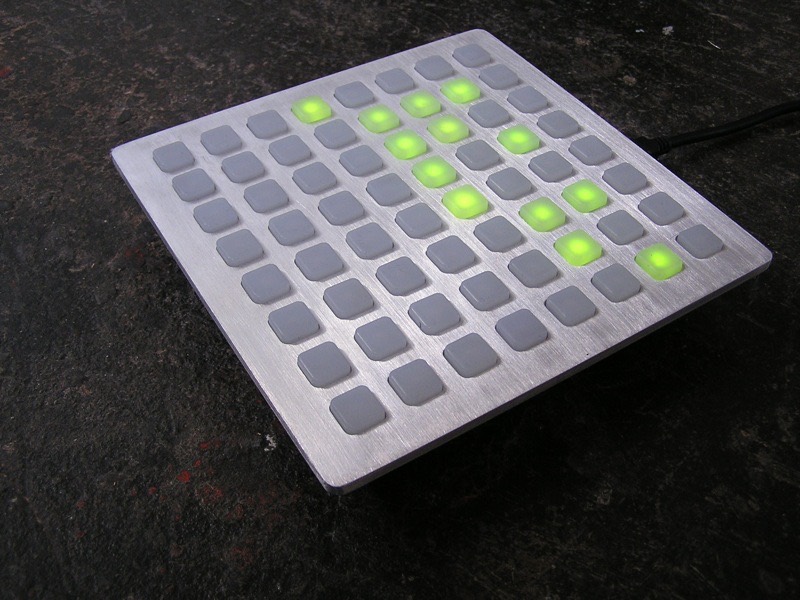 a grid of internally lit tactile pushbuttons. each button has an internal light. two models exist:

the light and button systems interface to the computer independently: the light feedback does not necessarily follow the button input. this means that a button press doesn’t always toggle its corresponding light, which would be completely limiting. by splitting the systems, the computer can display different information on the grid of lights continually while collecting button presses.

the interaction between the buttons, lights, and computer software is all configurable by the user. of course we provide several preset configurations which feature our favorite uses. we’ve designed an easy to use routing system, so that programming skills are by no means required to integrate the box with a preexisting computer software setup. for those interested in making more complicated control applications we provide direct software access to button and light activity.

The original monome Flickr is still around with photos from 2006. Here’s the first (find-able) video on YouTube of the monome (video) & all the rest since then.

The upcoming ADABOX 10 is a multi-sensory feast of light and sound. All throughout the month of November we’ll be posting up what inspired us to create one of our favorite ADABOX yet that YOU can get delivered in December if you sign up now! http://www.adabox.com/ Give ADABOX as a GIFT or treat yourself to sonic and photonic goodness.

Filed under: Adabox — by phillip torrone