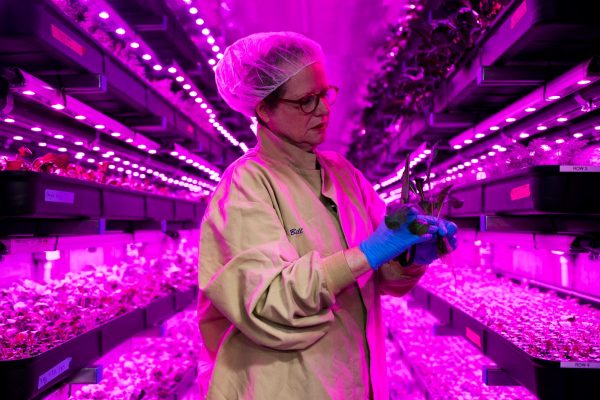 ike Zelkind stands at one end of what was once a shipping container and opens the door to the future.

Thousands of young collard greens are growing vigorously under a glow of pink-purple lamps in a scene that seems to have come from a sci-fi movie, or at least a NASA experiment. But Zelkind is at the helm of an earthbound enterprise. He is chief executive of 80 Acres Farms, with a plant factory in an uptown Cincinnati neighborhood where warehouses sit cheek by jowl with detached houses.

Since plants emerged on Earth, they have relied on the light of the sun to feed and grow through the process of photosynthesis.

But Zelkind is part of a radical shift in agriculture — decades in the making — in which plants can be grown commercially without a single sunbeam. A number of technological advances have made this possible, but none more so than innovations in LED lighting.

“What is sunlight from a plant’s perspective?” Zelkind asks. “It’s a bunch of photons.”

Diode lights, which work by passing a current between semiconductors, have come a long way since they showed up in calculator displays in the 1970s. Compared with other forms of electrical illumination, light-emitting diodes use less energy, give off little heat and can be manipulated to optimize plant growth.

In agricultural applications, LED lights are used in ways that seem to border on alchemy, changing how plants grow, when they flower, how they taste and even their levels of vitamins and antioxidants. The lights can also prolong their shelf life.

“People haven’t begun to think about the real impact of what we are doing,” says Zelkind, who is using light recipes to grow, for example, two types of basil from the same plant: sweeter ones for the grocery store and more piquant versions for chefs.

For Zelkind, a former food company executive, his indoor farm and its leading-edge lighting change not just the way plants are grown but also the entire convoluted system of food production, pricing and distribution in the United States.

High-tech plant factories are sprouting across the United States and around the world. Entrepreneurs are drawn to the idea of disrupting the status quo, confronting climate change and playing with a suite of high-tech systems, not least the LED lights. Indoor farming, in sum, is cool.

It has its critics, however, who see it as an agricultural sideshow unlikely to fulfill promises of feeding a growing urbanized population.