How to Get Away With Stealing Military-Grade Technology: An Interview With Survival Research Labs’ Mark Pauline 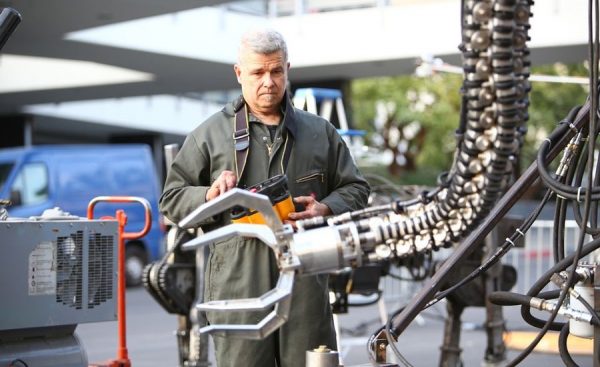 Mark Pauline is an undisputed mastermind when it comes to sticking it to the man. For the past thirty years, he’s been mesmerizing audiences and machinophiles around the world with his terrifying and satirical machine-based performances. Offering an alternative outlet for would-be war machines and their engineers, Pauline’s Survival Research Laboratories (SRL) is a performance art group that re-appropriates these tools of weaponized industry into objects of pure entertainment. Their shows are a cacophonous melee of fast spinning parts, large projectiles, and explosions… did we mention the flame hurricane? They made a flame hurricane.

Rooted in Pauline’s unbending impulse to resist authority whenever possible, SRL is relentlessly tongue-in-cheek. Their performances are often given elaborate bureaucratic titles, a satirical nod to those generated in academic research papers. The Unexpected Destruction of Elaborately Engineered Artifacts, Survival Research Laboratories Contemplates a Million Inconsiderate Experiments is a particularly procedural example.

This past January, after spending the past several decades as a self-made art-world outlaw, Pauline exhibited his first project within the institutional art world, showcasing his Pitching Machine (a gargantuan projectile that hurls wooden planks up to 200 miles per hour into a bulletproof container). The show received rave reviews and marked an exciting new territory for Pauline’s work. Here, Artspace’s Shannon Lee discusses the history of SRL and learns how to get away with stealing military-grade technology with Pauline at Culture Lab Detroit, where Pauline spoke on a panel with Anicka Yi and Eyal Weizman on the Aesthetics of the Future. Introduced by the actor Peter Weller (aka: Robocop), one couldn’t find a more fitting place to be talking about machine re-appropriation than motor city itself.

How did SRL get started?
It’s fairly straight forward. I wanted to learn some trades because I wanted to be an artist as a teenager. I didn’t want to become an engineer in any typical sense because I knew that would mean I’d be a tool of the man. I made a conscious decision and decided to take sociology and psychology courses instead of advanced mathematics during my last years of high school. I also wanted to figure out how to make money as an artist; I’d known other people in the field and they just never had any money and had shitty jobs and I thought, “I’m not gonna do that.” And so I learned a trade and was able to get a job.

What was your first job?
My first job was at an ironworks. Pretty soon I was making these massive crane booms and went on to build much bigger robots than I do now outside of Eglin Airforce base. I was building these massive thirty-ton target robots. I loved the tools! The more I got into it, the more I got to appreciate how powerful those machines were. At the time, mechanical technology was what was happening.
Still, when I was working at factories, I never really liked that I was making a bunch of stuff that nobody needs, or making trucks to bring the stuff that nobody needs to places nobody needs to go, or making stuff that’s part of a killing economy. I was a foreman by the time I was nineteen, worked in the oil fields in Santa Barbara welding the high pressure pipes… they were difficult jobs. After all that, I went to art school for four years and when I graduated, everyone was encouraging me to move to New York to be a part of that whole art scene. It was mostly people from the punk circle like Exene from the band X and Arto Lindsay from DNA. But there were also people who’d wanted me to move to San Francisco—and that’s where I ended up.

Sounds fairly happenstance.
It was! I was on my way to becoming a successful artist—the work I was doing in college was pretty well received (I’d gone to a small liberal arts school called Eckert College down in Florida). But I ended up in San Francisco doing marginally legal stuff. There was this show that I’d wanted to do where I’d take photos of these billboards that I would modify to say what they were really saying. The gallery I pitched this to was not having it. The owner asked if I was getting permission to modify them—of course not! They would also come with threats that said that they couldn’t come to remove them for two weeks or we’d destroy all of their billboards. Really kind of proto-terrorist actions. But the idea for SRL came to me after two weeks of sitting down and brainstorming.

Comments Off on How to Get Away With Stealing Military-Grade Technology: An Interview With Survival Research Labs’ Mark Pauline