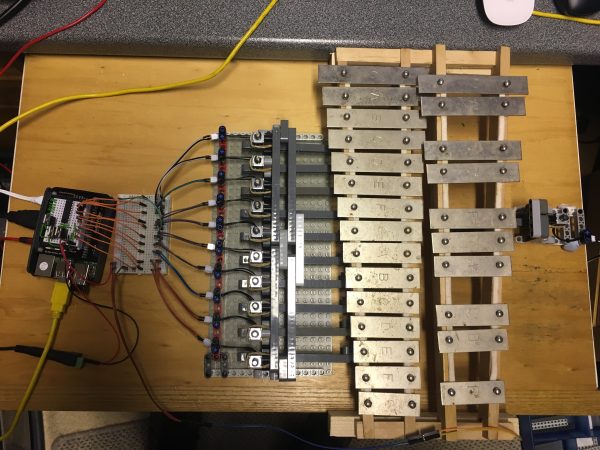 The release of Sonic Pi version 3 last summer opened up a whole new range of possibilities for the use of this free versatile music program, available for the Raspberry Pi, Apple Mac, and Windows PC computers, and, if you compile it yourself, for various Linux Computers. The key to this was the ability of Sonic Pi to send and receive signals using MIDI, OSC messages, and audio input and output. Over the year I have written about several projects making use of these facilities, but this current project is to me one of the most satisfying, and fulfils an ambition to produce a Sonic Pi controlled musical instrument. This article assumes you are using a Pi 3.

About 30 or so years ago, we bought a Glockenspiel for our Son, who was musical, but for many years when he had grown up it languished in our attic. It had a range of two octaves from :G5 to :G7 Although it is possible to utilise all these notes, I decided to limit the range, using only the notes :C6 to :E7 plus a “roving note” which could be allocated to any of the other notes. Initially I used this on :Fs6, although I have also used it on :G5 in some pieces. The reason for limiting the range was largely on cost grounds, as I intended to use small 5v solenoids to activate the notes, and these cost £5 each. Also, I wanted to mount the driver circuitry on a RasPiO HAT and this could only easily accommodate 11 circuits. Finally, I intended to use lego parts for the hammer actuators, and I had a limited quantity of lego available.

Similar projects have been done in the past, but this is the first I have seen which utilises Sonic Pi to drive the instrument, most of the others having a midi interface, often achieved using an arduino in the interface circuit, for example this one by Mike Cook. There is even a hackaday project from 2010  to build one from scratch, making the bars and the solenoids. My constructional skills are not great, so I resolved to try and use Lego as my main building material, and in fact the only other “construction” involved was to saw two pieces of wood to act as supports for the Glockenspiel, with which I could cope!