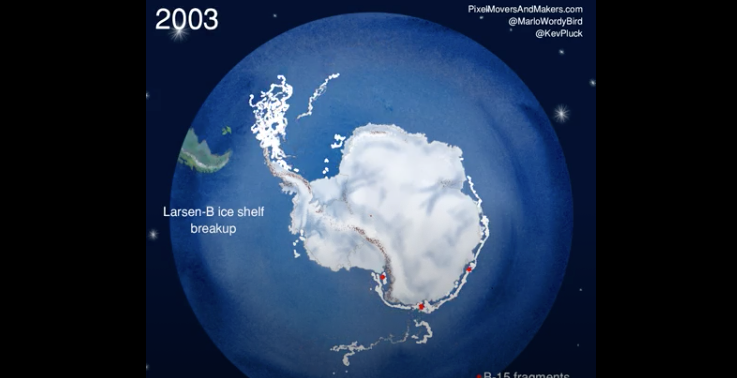 Watch this time-lapse simulation from Pixel Movers & Makers Via Earther and Twitter:

We've been looking forward to making this!

Climate visualization specialists Pixel Movers and Makers have taken more than 40 years of data on the migration of icebergs and set it in motion, showing ‘bergs spinning off Antarctica and into the ocean at an increasingly alarming clip.

Icebergs form on the regular in Antarctica. Sometimes, they’re spectacular like the recent sheet cake-like one, or the Delaware-sized hunk that broke off Larsen C ice shelf last year. Other times they’re anonymous hunks of ice or, if they’re big enough, given names by the National Ice Center so they can be put on navigation charts.

But once they’ve broken off the glaciers and ice shelves that ring the Antarctic, they’re prone to the vagaries of ocean currents and the prevailing winds like a toy boat dropped in a pond. With the advent of satellite technology in the 1970s, their paths have become easy to track around Antarctica. And that’s the data used to create the new animation.

Comments Off on Watch 40 Years of Icebergs Breaking off Antarctica