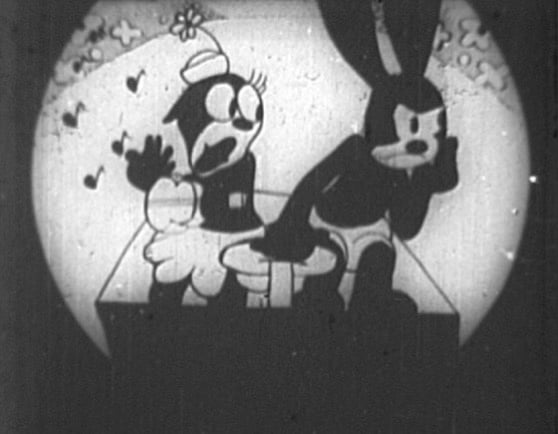 A long-lost cartoon produced by Walt Disney and featuring a character that led to the creation of Mickey Mouse was confirmed in Japan decades after it was bought by a high school student.

The film, whose original title was “Neck ’n’ Neck,” was released in 1928, starring Oswald the Lucky Rabbit.

Anime history researcher Yasushi Watanabe, 84, who lives in Neyagawa, Osaka Prefecture, bought the film at a toy wholesalers’ area in Osaka city when he was in high school. It carried a 500-yen price tag and a Japanese title, “Mickey Manga Spide” (Mickey cartoon speedy).

For decades, Watanabe did not realize the historical value of the film in his possession.

“As I’ve been a Disney fan for many years, I’m happy that I was able to play a role (in the discovery),” he said.

The original “Neck ’n’ Neck” is five minutes long. But it was shortened to two minutes for home movie projectors and sold to the public in the form of a 16-mm film.

In the two-minute version, a dog policeman on a motorbike chases Oswald and his girlfriend who are on a date in a car.

When the speeding car and motorbike hit contoured valleys and a steep mountain road, the characters and the vehicles stretch and shrink, a convention commonly used in Disney works over the years.

Watanabe recently read “Oswald the Lucky Rabbit: The Search for the Lost Disney Cartoons,” a U.S. book published last year. It was written by David Bossert, 58, who for many years was involved in producing animation movies at the U.S. Disney Studios.

The book said the whereabouts of seven of 26 short films featuring Oswald that were produced by Walt Disney were unknown.

Watanabe believed the two-minute “Mickey Manga Spide” film might be one of the missing short films.

To confirm, he asked The Asahi Shimbun to contact Bossert and the Walt Disney Archives of the United States. They confirmed that the film was “Neck ’n’ Neck,” one of the seven lost cartoons.