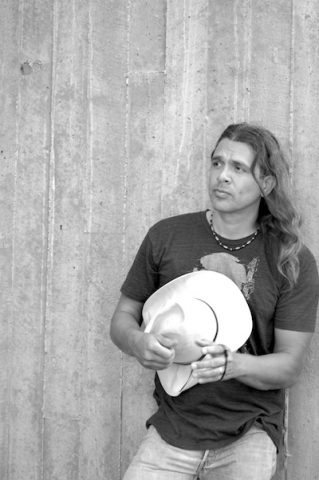 SGJ is great! Here’s his bio via his site demontheory.

born in 72, grew up on Elvis, even have some memories of being four years old and my mother holding me up above the crowd at one of his concerts, how there was just a sea of popping flashbulbs, this shiny guy way up front. grew up all over Texas, mostly West Texas, mostly in a place too small to even have a post office. learned farming and ranching from both sides of my family, who told me not to do what they did, to use my head instead of my back. bit my tongue off in the third grade, had it sewn back on, spent a lot of time just watching people. played Danny Zuko in a production of Grease that fell apart in the sixth grade. had read every Louis L’Amour, Conan and Stephen King by the time I was a freshman in high school. played just lots and lots of basketball, but then got kicked out of school enough that I finally got the hint, quit, thought pool was maybe my calling. it wasn’t. neither were Ford trucks. finally snagged a diploma through alternative school and – surprise – got a free ride my first year of college, thanks to my mother. the one who took me to Elvis. she knew, I think, that if I just got there, I’d get hooked on the learning. she was right. I was a philosophy major, took some writing classes, then bounced up to grad school. never to teach, to be a professor, but to snag whatever craft tricks I could, smuggle them out to horror and scifi and fantasy and westerns, each of which I was in love with at the same time. my first publication was my first semester doing my MA work, I think. a story called “Paleogenesis, circa 1970.” BLACK WARRIOR REVIEW. discovered Thomas Pynchon and Philip K. Dick soon after that; have no clue how I ever pretended to have gotten along without them. wound up finally at Florida State, snagged a PhD there, then lucked into getting my dissertation published. back then it was called FOR THERE NEEDED NO HORSES (a Kafka-line). by the time the book got published, it would be THE FAST RED ROAD, A PLAINSONG. was working in the warehouse at Sear’s at that time, moving fridges all day. with my back, yes. which was soon to be trashed, stranding me in the land of deskjobs. to celebrate FRR’s publication, my wife and I ate a plate of fried zucchini at a sit-down restaurant. it tasted very good. my next novel was ALL THE BEAUTIFUL SINNERS. it’s not my second book, just my second published. I wrote five between FRR and ATBS, I think. one of them THE BIRD IS GONE: A MANIFESTO, came out right after ATBS. have written ten or fifteen since then, too. can’t seem to stop.

Learn more about him here.