The music of Joanne Shenandoah #NativeAmericanHeritageMonth 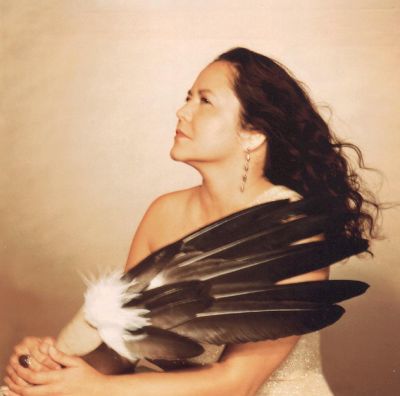 On the last day of Native American Heritage month we would like to celebrate Grammy award winning singer Joanne Shenandoah. Around the time I first moved to NYC, I wandered into the National Museum of the American Indian where Joanne happened to be performing (unassumingly for a small rapt audience in the atrium). I had been a fan of hers for a long time- bought her album All spirits sing for my cousins daughters when they were vey young and it was a huge hit, we would sing along in english and oneida. Seeing her was unexpected and exciting – her voice soared! Its one of my favorite early memories of this city – it seemed like anything and everything was possible here! This short biography is via Allmusic!

Native American vocalist Joanne Shenandoah is a member of the Wolf Clan of the Oneida Nation, Iroquois Confederacy. Her parents, Maisie Shenandoah, a Clanmother, and the late Clifford Shenandoah, an Onondaga chief and jazz guitarist, loved music and named Joanne “Tek-ya-wha-wha,” which means “she sings” in the Oneida language. As a child, Joanne learned all the tribal songs and studied voice, flute, piano, clarinet, guitar, and cello. She draws upon her rich heritage, yet can bring these songs into a contemporary setting.

In 1994, Shenandoah sang at the Woodstock Festival and has appeared on and created sound tracks for numerous television shows, most notably Northern Exposure and How the West Was Lost. She has performed and recorded with many accomplished musicians in Europe and America, including pianist/composer Peter Kater, Neil Young, Kris Kristofferson, Willie Nelson, Jackson Browne, and Rita Coolidge. From traditional chants to contemporary ballads of Native ways, her music has been described as an emotional experience, a “Native American trance.”

See more and learn more about Joanne Shenandoah on her website! Thanks for celebrating Native American Heritage Month with us!

Comments Off on The music of Joanne Shenandoah #NativeAmericanHeritageMonth