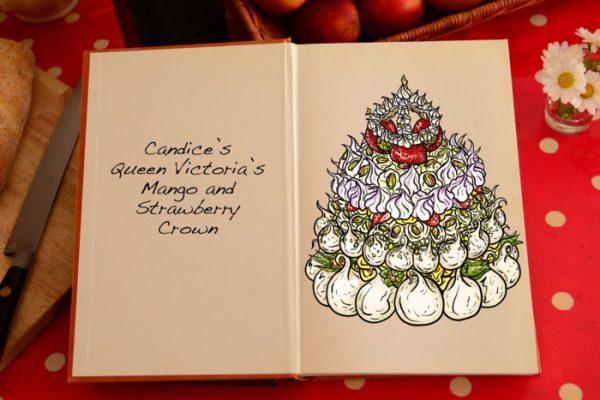 Like any decent person with a soul and a Netflix account, I love The Great British Baking Show. It’s by far the brightest light in the ridiculously inundated market of cooking content. Full disclosure, my best friend and I even dressed up as Mel & Sue, the show’s former hosts, in Halloween 2017. And I don’t even like cake!!

Although I was skeptical about all the staff and network changes over on The Great British Baking Show (Mary Berry 4evr), I somehow found myself just as into the last two seasons as ever before. Perhaps that’s due in part to Tom Hovey, who has created all of the beautiful culinary illustrations for each episode’s many different bakes since the show’s first season.

Hovey’s interest in culinary illustration didn’t stem from any childhood passion. He cited satirists like Ralph Steadman and Gerald Scarfe as his primary influences, as he dabbled in the London street-art scene after graduating college, preferring “montorous characters” and “obscene” sketches to evoke reactions from viewers. It was only after working on The Great British Baking Show for a few seasons that he realized his creative fulfillment was being met, and yes, he was also turning into a massive foodie, too. “I was always looking for a style, always looking for inspiration,” he said. “It took me awhile, but I finally realized that the style had found me. I realized I could and should make food illustration my main focus.”

Comments Off on The Great British Baking Show: Meet the Show’s Illustrator