Isaac Asimov’s predictions for the year 2019, 35 years ago in the @torontostar #NewYearsEve #ScienceFiction #ClimateChange #Computerization #Education 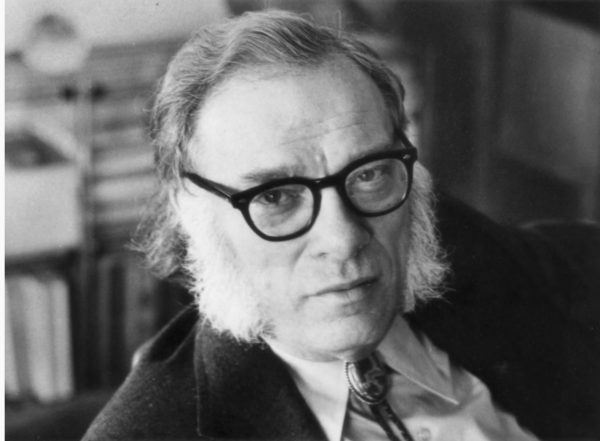 Asimov was asked what life would be like in 2019, a generation later than that time and 35 years after the book 1984. Here is some of his thoughts:

Let us, therefore, assume there will be no nuclear war — not necessarily a safe assumption — and carry on from there.

Computerization will undoubtedly continue onward inevitably. Computers have already made themselves essential to the governments of the industrial nations, and to world industry: and it is now beginning to make itself comfortable in the home. An essential side product, the mobile computerized object, or robot, is already flooding into industry and will, in the course of the next generation, penetrate the home.

It is not that computerization is going to mean fewer jobs as a whole, for technological advance has always, in the past, created more jobs than it has destroyed, and there is no reason to think that won’t be true now, too. However, the jobs created are not identical with the jobs that have been destroyed, and in similar cases in the past the change has never been so radical. 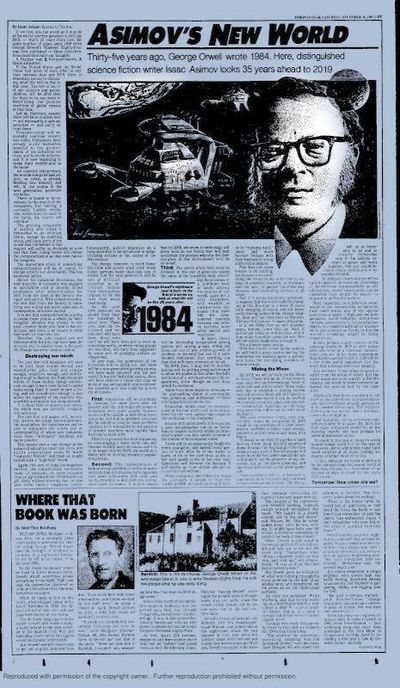 The jobs that will appear will, inevitably, involve the design, the manufacture, the installation, the maintenance and repair of computers and robots, and an understanding of whole new industries that these “intelligent” machines will make possible.

This means that a vast change in the nature of education must take place, and entire populations must be made “computer-literate” and must be taught to deal with a “high-tech” world.

But from here, things become optimistic beyond what we have been able to accomplish:

The consequences of human irresponsibility in terms of waste and pollution will become more apparent and unbearable with time and again, attempts to deal with this will become more strenuous. It is to be hoped that by 2019, advances in technology will place tools in our hands that will help accelerate the process whereby the deterioration of the environment will be reversed.

Education, which must be revolutionized in the new world, will be revolutionized by the very agency that requires the revolution — the computer. Schools will undoubtedly still exist, but a good schoolteacher can do no better than to inspire curiosity which an interested student can then satisfy at home at the console of his computer outlet. There will be an opportunity finally for every youngster, and indeed, every person, to learn what he or she wants to learn. in his or her own time, at his or her own speed, in his or her own way.

Finally, Asimov’s predictions for space are also a bit more optimistic than we have been able to fully achieve:

By 2019, we will be back on the moon in force. There will be on it not Americans only, but an international force of some size; and not to collect moon rocks only, but to establish a mining station that will process moon soil and take it to places in space where it can be smelted into metals, ceramics. glass and concrete — construction materials for the large structures that will be put in orbit about the Earth.

In addition, observatories will be built in space to increase our knowledge of the universe immeasurably; as will laboratories, where experiments can be conducted that might be unsafe, or impossible, on Earth’s surface.

By 2019, the first space settlement should be on the drawing boards; and may perhaps be under actual construction.

He ends by saying “In fact, although the world of 2019 will he far changed from the present world of 1984, that will only be a barometer of far greater changes planned for the years still to come.”

And as for how this article came to pass, the Star writes:

How and why did the Star get Asimov to write for us back in 1983?

Vian Ewart, who was Insight editor then, says the idea for an Orwell series came naturally, and he recalls the project fondly to this day. He put together a team including a writer (Ellie Tesher), an illustrator and layout designer.

“Asimov was popular at the time” for his science fiction, Ewart says, “so I simply phoned him at his New York home and asked him. He loved the idea of a 1984 series and was pleased to be ‘the lead-off writer.’ He was a very gracious man and charged $1 a word.”

Comments Off on Isaac Asimov’s predictions for the year 2019, 35 years ago in the @torontostar #NewYearsEve #ScienceFiction #ClimateChange #Computerization #Education