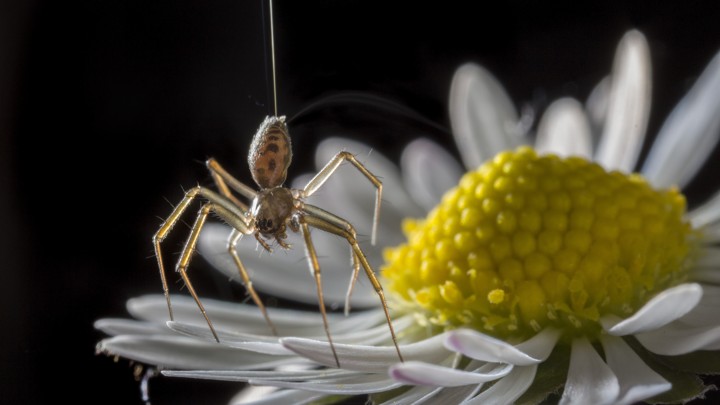 Via Ed Yong for The Atlantic. On October 31, 1832, Charles Darwin walked onto the deck of the HMS Beagle and realized that the ship had been boarded by thousands of intruders. Tiny red spiders, each a millimeter wide, were everywhere. The ship was 60 miles offshore, so the creatures must have floated over from the Argentinian mainland. “All the ropes were coated and fringed with gossamer web,” Darwin wrote.

Spiders have no wings, but they can take to the air nonetheless. They’ll climb to an exposed point, raise their abdomens to the sky, extrude strands of silk, and float away. This behavior is called ballooning. It might carry spiders away from predators and competitors, or toward new lands with abundant resources. But whatever the reason for it, it’s clearly an effective means of travel. Spiders have been found two-and-a-half miles up in the air, and 1,000 miles out to sea.

Erica Morley and Daniel Robert have an explanation. The duo, who work at the University of Bristol, has shown that spiders can sense the Earth’s electric field, and use it to launch themselves into the air.

Every day, around 40,000 thunderstorms crackle around the world, collectively turning Earth’s atmosphere into a giant electrical circuit. The upper reaches of the atmosphere have a positive charge, and the planet’s surface has a negative one. Even on sunny days with cloudless skies, the air carries a voltage of around 100 volts for every meter above the ground. In foggy or stormy conditions, that gradient might increase to tens of thousands of volts per meter.

Ballooning spiders operate within this planetary electric field. When their silk leaves their bodies, it typically picks up a negative charge. This repels the similar negative charges on the surfaces on which the spiders sit, creating enough force to lift them into the air. And spiders can increase those forces by climbing onto twigs, leaves, or blades of grass. Plants, being earthed, have the same negative charge as the ground that they grow upon, but they protrude into the positively charged air. This creates substantial electric fields between the air around them and the tips of their leaves and branches—and the spiders ballooning from those tips.