On January 22, 1984, Apple introduced the Macintosh (Mac) to the world during the iconic US football championship – the Superbowl, where many eyes are focused, and ad rates are astronomically expensive.

At the end was: 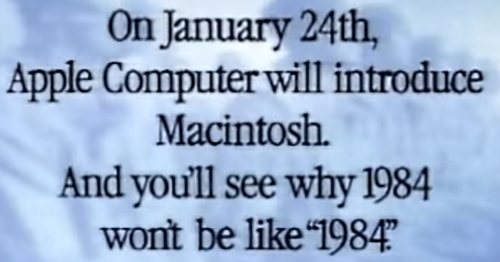 “1984” is an American television commercial that introduced the Apple Macintosh personal computer. It was conceived by Steve Hayden, Brent Thomas and Lee Clow at Chiat\Day, produced by New York production company Fairbanks Films, and directed by Ridley Scott. English athlete Anya Major performed as the unnamed heroine and David Graham as Big Brother. It first aired in 10 local outlets, including Twin Falls, Idaho, where Chiat\Day ran the ad on December 31, 1983, at the last possible break before midnight on KMVT, so that the advertisement qualified for 1983 advertising awards. Its second televised airing, and only national airing, was on January 22, 1984, during a break in the third quarter of the telecast of Super Bowl XVIII by CBS. 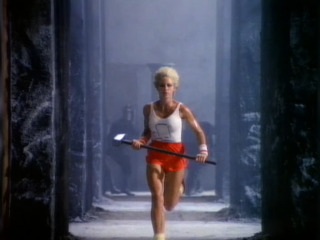 In one interpretation of the commercial, “1984” used the unnamed heroine to represent the coming of the Macintosh (indicated by her white tank top with a stylized line drawing of Apple’s Macintosh computer on it) as a means of saving humanity from “conformity” (Big Brother). These images were an allusion to George Orwell‘s noted novel, Nineteen Eighty-Four, which described a dystopian future ruled by a televised “Big Brother”. The estate of George Orwell and the television rightsholder to the novel Nineteen Eighty-Four considered the commercial to be a copyright infringement and sent a cease-and-desist letter to Apple and Chiat\Day in April 1984.

Originally a subject of contention within Apple, it has subsequently been called a watershed event and a masterpiece in advertising. In 1995, The Clio Awards added it to its Hall of Fame, and Advertising Age placed it on the top of its list of 50 greatest commercials.

Happy 35th birthday to an ad that may have saved Apple from the likes of IBM.