On this day in 1980: The Sinclair ZX80 computer launches in the UK #VintageComputing #RetroComputing #Sinclair 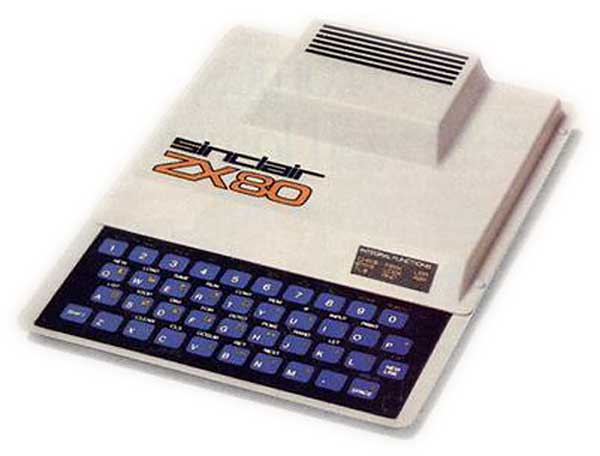 Via the Center for Computing History: The Sinclair ZX80 personal computer was launched by Sinclair Research Ltd of Cambridge on 29th January 1980.
It was the first computer (with a qwerty keyboard) available to the British public less than a hundred pounds (£99.95 in 1980). Wikipedia says:

The Sinclair ZX80 is a home computer launched on 29 January 1980[2] by Science of Cambridge Ltd. (later to be better known as Sinclair Research). It is notable for being the first computer (unless one counts the MK14) available in the United Kingdom for less than a hundred pounds. It was available in kit form for £79.95, where purchasers had to assemble and solder it together, and as a ready-built version at £99.95. The ZX80 was very popular straight away, and for some time there was a waiting list of several months for either version of the machine.

Internally, the machine was designed by Jim Westwood around a Z80 central processing unit with a clock speed of 3.25 MHz, and was equipped with 1 KB of static RAM and 4 KB of read-only memory (ROM). The ZX80 was designed around readily available TTL chips; the only proprietary technology was the firmware. The successor ZX81 used a semi-custom chip (a ULA or Uncommitted Logic Array) which combined the functions of much of the earlier hardware onto a single chip reducing the chip-count from 21 to 4. However this was mainly a cost-reduction effort; the hardware functionality and system programs were very similar, with the only significant difference being the NMI-generator necessary for slow mode in the ZX81 (see ZX81 for technical details), and the 4K integer-only Sinclair BASIC upgraded to 8K floating-point-capable, with the upgraded ROM also available as upgrade for the ZX80. Both computers can be made by hobbyists using commercially available discrete logic chips or FPGAs.

The UK version of the machine was the standard, and only changes that were absolutely necessary to sell units in other markets were made. In fact, the only real change made in most markets involved the video output frequency (the ZX80 used an external power transformer, so differences in AC line frequency and outlet were not an issue to the machine itself). One outcome of this is that the machine had some keyboard keys and characters that were distinctly British: “Newline” was used instead of “Enter”, “Rubout” instead of “Backspace” or “Delete”, and the character set and keyboard included the Pound symbol.