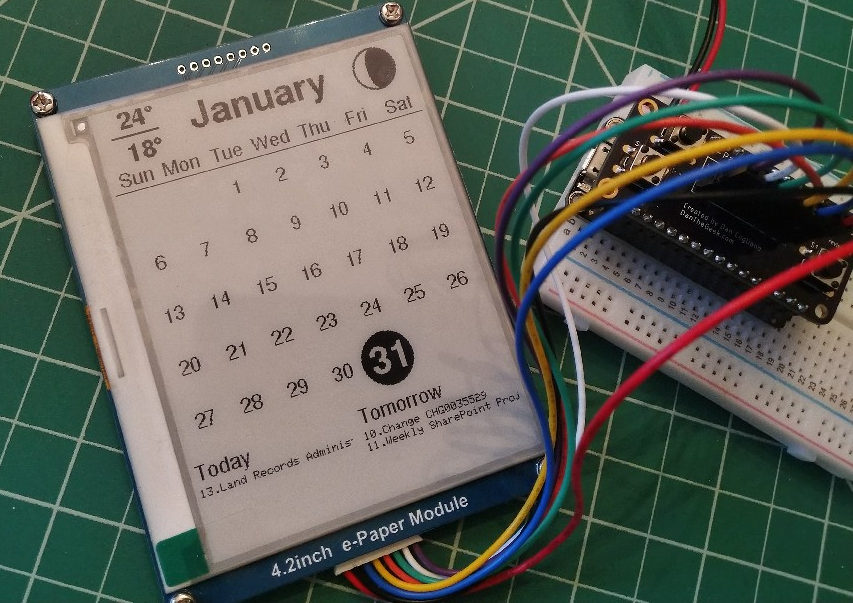 Dan the Geek has been working with beautifully crisp ePaper displays of late. He’s taken the concept of a “magic calendar” updated via Google calendar (video below) and realized the design with a 4.2″ ePaper display and an Adafruit Feather HUZZAH 32 microcontroller.

I used the following items to create my version of the “Magic Calendar”:

I have tested this with both the Adafruit HUZZAH 8266 and Adafruit HUZZAH 32. The HUZZAH 32 version actually works much better for larger e-Paper displays like the 4.2 inch display used here due to the increased memory usage needed to hold the display buffer. This could work on the HUZZAH 8266 if using a smaller e-Paper display. Waveshare makes e-Paper devices in several different sizes.

I made a custom Featherwing to make it easier to connect the Waveshare module to the HUZZAH device.  In addition to making it easy to connect the 8 wires from the display, the custom Featherwing also includes a reset button and two additional buttons for software use. I use the additional buttons to put the device into a web based setup mode. I will be releasing this custom Featherwing on Tindie for those interested in it. Although Waveshare provides a graphics library for drawing on the e-paper display, I instead used the Adafruit GFX library, which was very easy to use with the display.

Check out the details of this build here.