I used to be a regular mouse user like everyone else, but between repetitive stress injury, frequently working on my laptop while watching TV on the couch, and absolutely hating trackpads; a trackball was the way to go. But, if I’m honest, I’ve gained a bit of an obsession with them. Currently I rock out with the Logitech M570 and MX Ergo.

So, a few months ago, when my wife and I were watching Ocean’s 8, my jaw dropped a bit when I saw this:

what you see there is the trackball mouse used by the character “9-Ball”, the con-woman team’s quirky hacker, played by Rihanna. There’s only a couple brief shots of the actual mouse in the film and it at least appears to work (more on this in a second). Ridiculous as it is, I had to have one.

So starts a build to make a pool ball based trackball!

Finding an arcade trackball, I was down the hole of an Arcade / Billiard themed mouse, so I decided it was best to just go all in and use 24mm arcade buttons as well. I found these great buttons over on Adafruit so I picked up a few of each color.

The minute details of the project – PCB designs, Firmware, and CAD files – are all available over on GitHub: https://github.com/ManiacalLabs/ArcadeTrackballMouse

and read the complete blog post for the craft of bring this project to life along with a Hackaday review article here. And get your fun arcade buttons here. 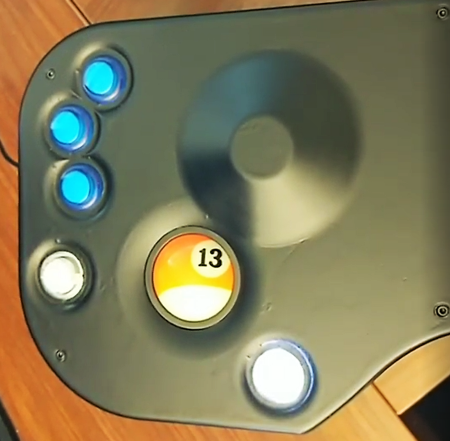