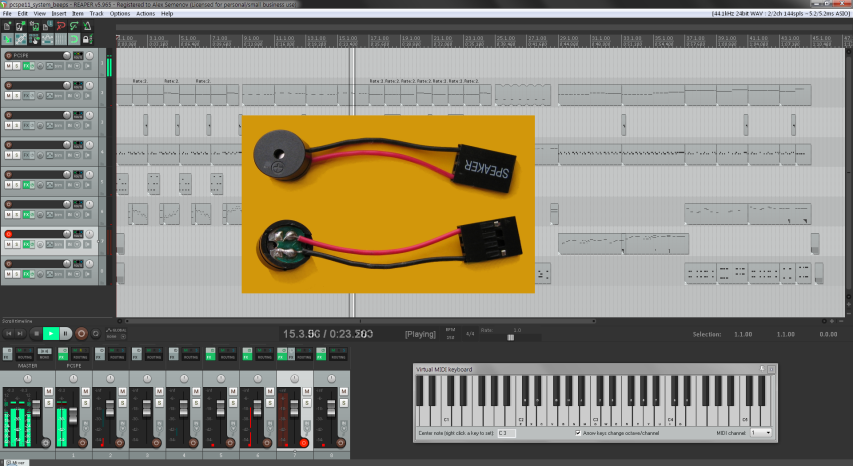 Known now as a “motherboard speaker”, or just “beeper”, the PC Speaker was introduced in 1981 along with the first personal IBM computer. Being a successor of the big serious computers for serious business, it has been designed to produce very basic system beeps, so it never really had a chance to shine bright as a music device in numerous entertainment programs of the emerging home market.

A PC Speaker can effectively play tones in the 100 to 2000 Hz range. It can go well lower or higher, but this brings out some issues. The small loudspeakers and piezos can’t reproduce other frequencies well enough. Above 2000 Hz it also starts to deviate from musical note frequencies a lot due to the timer resolution. Below 100 Hz the sound frequency can become lower than the update period, leading to losing some of the sound updates, because the timer only updates the frequency divider once a current count with the previous divider is done.

Writing on habr.com, shiru8bit decided to see what could be done with the architecture of the PC speaker given modern wizardry:

The following article is an in-depth overview of the original PC Speaker capabilities and making of the project, for those who would like to know more.

The making of a modern album

Originally I had no intention to make a music album. I was designing a game project that would be styled as a pseudographics game of the XT era. To complete the vision I came up with an idea to make not just stylization, but actual PC Speaker music that would also follow the common 8-bit era games formula — a looped track about a minute long. I didn’t want to use digital samples or software synthesis, as it would be out of place for considered aesthetics, and wouldn’t have an unique character in itself. I felt a special appeal in the monophonic music since I heard it for first time on ZX Spectrum in games such as Ping Pong, Stardust, Score 3020. Having such an opportunity, I was eager to try to make an actual monophonic music, and attempt to squeeze out some previously unheard result via arrangement means — an appealing challenge to me as a music composer.

The work on the music get carried me away, and interested more than the game project itself. . . I had some music done, and feeling that it does have some release-worthy potential, I thought it would be nice to do a quick prod and release it to the public just as a standalone MS-DOS music disk, that would also serve as a demo for the PCSPE capabilities.

See the video of this work and read the full article here.