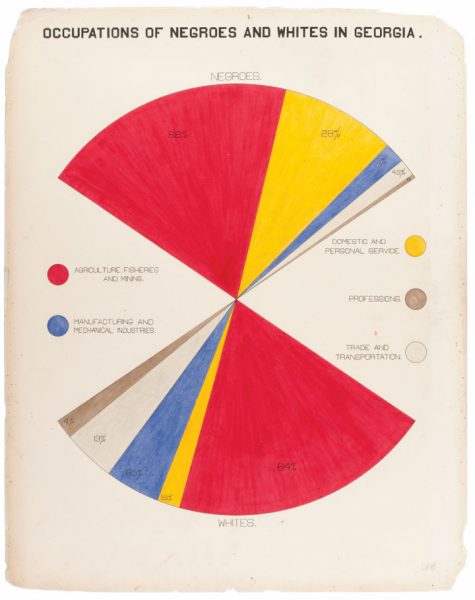 W.E.B. Du Bois is best known for his sharp, sociological imagination and groundbreaking book of racial philosophy, The Souls of Black Folk. But the writer, historian, and Pan-African civil rights activist also had a remarkable visual mind. Among his many talents, Du Bois was a designer and curator of Black culture, the most explicit example being his data portraits, which vibrantly visualized the complexities of racial segregation, which Du Bois iconically dubbed “the color line.”

The Souls of Black Folk, published in 1903, has reverberated through academic and public discourse for over a century for its astute and abiding racial analysis. But prior to the publication of this landmark text, Du Bois visualized his notion of double consciousness in modernist data portraits at the Paris Exposition in 1900. The infographics were a part of the Exhibit of American Negroes, which Du Bois called “an honest straightforward exhibit of a small nation of people, picturing their life and development without apology or gloss, and above all made by themselves.”