American scientist Valerie Thomas who worked at NASA from the 1970s up until her retirement in 1995. She invented the illusion transmitter in 1980. Via Lemelson-MIT Program: 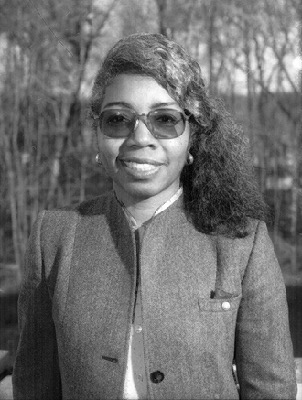 Valerie L. Thomas was born in May of 1943 in Maryland. She was fascinated with technology as a very young child. At age eight her curiosity about how things worked inspired her to borrow a book called “The Boy’s First Book On Electronics,” which she took home hoping her father would help her take on some of the projects in it. After all, he liked to tinker with radios and television sets. But he did not help her.

Thomas attended an all-girls high school that did not help her, either. At the time, scientific subjects were not considered important or suitable for women. So, no one encouraged Thomas to take the advanced math classes that were offered at her school, and she continued to look up her technological aptitude as more of a curiosity than anything else.

This changed in college, when Thomas enrolled at Morgan State University as one of only two women in her class to major in physics.  She was an excellent student, and soon she had acquired the knowledge of mathematics that led her to a position as a mathematical/data analyst for NASA.