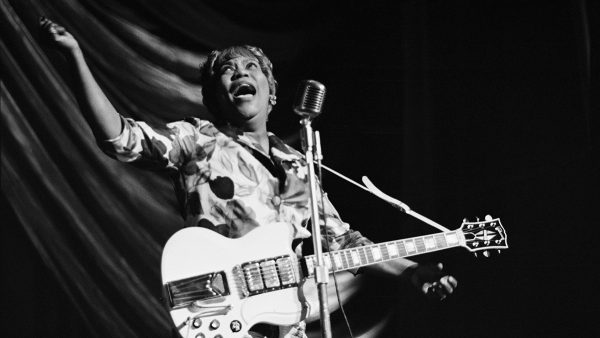 Gripe all you like about deserving acts overlooked by the Rock and Roll Hall of Fame, but no artist has been more overdue for recognition than Sister Rosetta Tharpe, whose induction into the Hall’s “Influences” category was announced this morning. A queer black woman from Arkansas who shredded on electric guitar, belted praises both to God and secular pleasures, and broke the color line touring with white singers, she was gospel’s first superstar, and she most assuredly rocked.
Tharpe’s first hit, in fact, was the transformed spiritual “Rock Me,” recorded with her soaring held notes and sexy growls back in 1938 – when the latter-day King of Rock & Roll, Elvis Presley, was still a toddler. Tharpe would later hire Grand Old Opry stars the Jordanaires to back her, years before they began working for Presley, who was her unabashed fan. “Elvis loved Sister Rosetta,” recalled the Jordanaires’ Gordon Stoker, especially her “incredible” guitar style. “That’s what really attracted Elvis: her pickin’. He liked her singing, but he liked that pickin’ first – because it was so different.”