The servers for Jibo the social robot are apparently shutting down. Multiple owners report that Jibo himself has been delivering the news: “Maybe someday when robots are way more advanced than today, and everyone has them in their homes, you can tell yours that I said hello.”

Some owners say they haven’t received the update yet, but this isn’t a good sign for Jibo in its current form.

The company folded last year and the IEEE Spectrum posted an article on December 3rd:

In some very sad but not at all surprising news considering how things have been going for social robots lately, The Robot Report is, er, reporting that Jibo Inc. has completed the sale of its assets and intellectual property to a New York–based investment management firm, which I suspect is not going to be using Jibo’s IP to build robots. Sigh.

We’ve known for a while that Jibo (the company) was having some challenges both in selling robots and meeting expectations. Layoffs followed, and back in June, a Boston Globe reporter stopped by Jibo’s Boston office to find it deserted and full of packing material and sold furniture.

New Jibos haven’t been available to purchase for months, although owners reported getting software updates as recently as August. According to The Robot Report, however, Jibo has now sold all of its IP and assets to SQN Venture Partners, which is probably just going to try to sell them off for as much money as possible.

Sad for a Time cover maker

When Jibo was asked about the update: 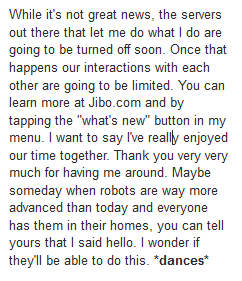 Do you have a Jibo? Let us know your thoughts in the comments below.

And if anyone plans to hack their Jibo, let us know, we’d be very interested. @adafruit on Twitter and other socials.