Growth in the Python Ecosystem #Python 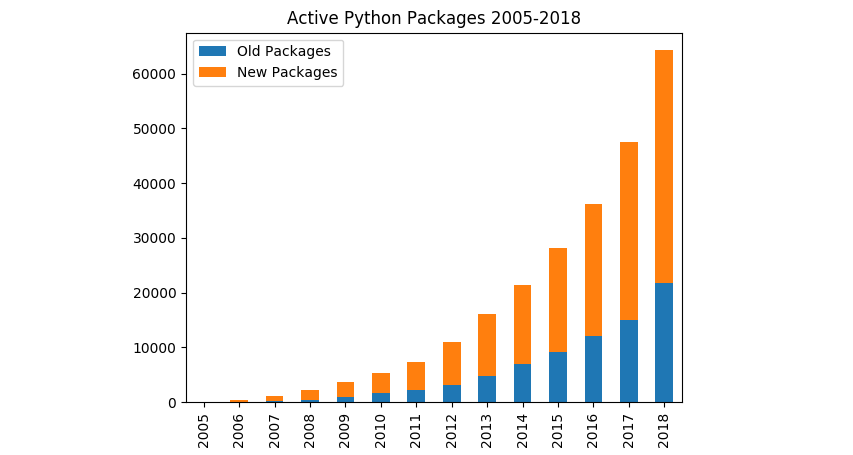 From pydist.com comes an analysis of data on the growth in Python from 2005 to 2018.

One of the cool things about building a PyPI mirror is having so much data about the Python ecosystem at my fingertips. I decided to explore how the ecosystem has been evolving since PyPI was created in 2003. Most of my analysis starts at 2005, since that’s when PyPI added the upload_time field.

The Python ecosystem has been steadily growing throughout this period. After the first few years of hyper growth as PyPI gained near-full adoption in the Python community, the number of packages actively developed each year—meaning they had at least one release or new distribution uploaded—has increased 28% to 48% every year.

The most surprising result I stumbled upon came from looking at the number of releases per package. Some of these I was expecting based on my personal experience upgrading dependencies frequently, such as AWS’s botocore at #15. But the cryptocurrency trading library ccxt immediately stood out like a sore thumb. With 4659 releases at time of writing, it has more than 3 times as many releases as any other package—despite being less than 2 years old! Its libraries.io page usually times out after 30 seconds when I try to load it. I am not sure whether this is excellent or terrible maintainership, but it is certainly impressive.

Another interesting thing to look at is how practices around distributing Python packages are changing. The biggest change was of course the release of Python 3. Binary wheels, introduced in 2012 and codified in PEP 427, are generally accepted as the best way to distribute Python packages. But adoption among package authors has taken time. Python Wheels tracks the adoption of wheels among PyPI’s 360 most downloaded packages; at time of writing 82.5% of them include wheel distributions in their releases. The long tail of the other >60k packages is lagging a bit behind, but the percentage of all releases that include at least 1 wheel distribution is growing steadily and just crossed 50% in 2018.

Comments Off on Growth in the Python Ecosystem #Python