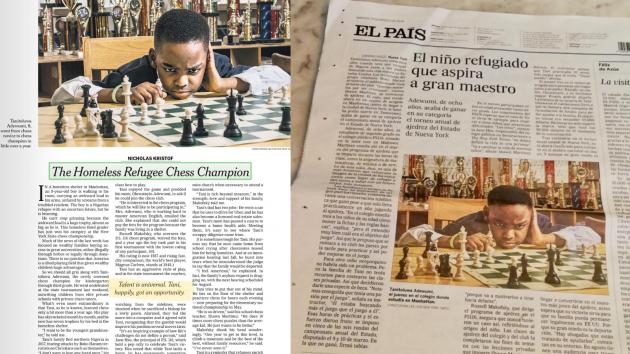 Tanitoluwa Adewumi has become one of the top chess players in America for his age group, Via Chess.com

Tanitoluwa was seven years old when he, his parents and his older brother reportedly fled from Nigeria in search for a safer place. Threatened by terrorist group Boko Haram, which is attacking Christians like his family, they left the country and ended up in New York in 2017.

Tani, as he is called by his friends, began attending the local elementary school, P.S. 116 located in Manhattan’s Kips Bay/Murray Hill neighborhood. There, a part-time chess teacher at the school taught him to play.

When Tani’s mother Oluwatoyin Adewumi wrote the school that her son was interested in joining the chess club, she had to add that she couldn’t contribute much. The family was living in a homeless shelter.

Russell Makofsky, owner of the program at Tani’s school, decided to waive the fees. A year later, the boy has a USCF rating of 1473 and is #27 in America for eight-year-olds. (Full disclosure: ChessKid.com is used by all P.S. 116 chess club students.)

On March 9 and 10, Tani participated in the New York State Championship. He won the category for children of his age, kindergarten to third grade, with five wins and one draw.