Via Phys.org – University of Pennsylvania Engineers have designed a metamaterial device that can solve integral equations. The device works by encoding parameters into the properties of an incoming electromagnetic wave; once inside, the device’s unique structure manipulates the wave in such a way that it exits encoded with the solution to a pre-set integral equation for that arbitrary input.

In a paper recently published in Science, Nader Engheta of the University of Pennsylvania’s School of Engineering and Applied Science and his team have demonstrated such a device for the first time.

Their proof-of-concept experiment was conducted with microwaves, as their long wavelengths allowed for an easier-to-construct macro-scale device. The principles behind their findings, however, can be scaled down to light waves, eventually fitting onto a microchip.

Such metamaterial devices would function as analog computers that operate with light, rather than electricity. They could solve integral equations—ubiquitous problems in every branch of science and engineering — orders of magnitude faster than their digital counterparts, while using less power. 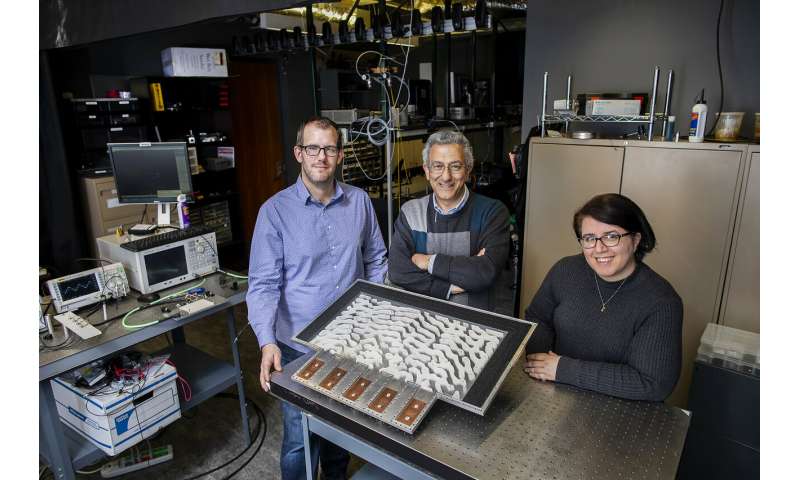 And how it works:

“Our device contains a block of dielectric material that has a very specific distribution of air holes,” Engheta says. “Our team likes to call it ‘Swiss cheese.'”

The Swiss cheese material is a kind of polystyrene plastic; its intricate shape is carved by a CNC milling machine.

“Controlling the interactions of electromagnetic waves with this Swiss cheese metastructure is the key to solving the equation,” Estakhri says. “Once the system is properly assembled, what you get out of the system is the solution to an integral equation.”