MIDI Maze is a networked first-person shooter for the Atari ST developed by Xanth Software F/X and released in 1987 by Hybrid Arts. The game found a wider audience on the Game Boy as Faceball 2000.

The game takes place in a maze of untextured walls. The world animates smoothly as the player turns, much like the earlier Wayout, instead of only permitting 90 degree changes of direction. It has been suggested that MIDI Maze, using the built-in MIDI ports of the Atari ST for networking, introduced the concept of deathmatch combat. 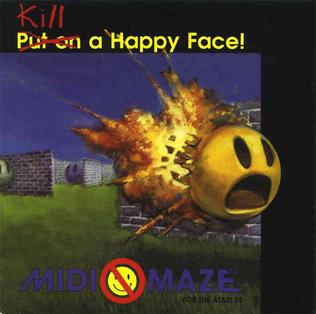 Up to 16 computers can be networked in a “MIDI Ring” by connecting one computer MIDI-OUT port to the next computer’s MIDI-IN port.

The game area itself occupies only roughly a quarter of the screen and consisted of a first-person view of a flat-shaded Pac-Man-like maze with a crosshair in the middle. All players are shown as Pac-Man-like smiley avatars in various colors. Bullets are represented as small balls.

The game is started by one designated “master” machine, which sets rules, divides players into teams, and selects a maze. A number of mazes come with the game, and additional mazes can be constructed using a text-editor.

It is notable for being the only Game Boy game to support 16 simultaneous players. It was thought it did so by connecting multiple copies of the Four Player Adapter to one another so that each additional adapter added another two players up to the maximum – thus seven such adapters would have been needed for a 16 player experience. But this method has not worked so far in tests. Originally special cables were used but these were never available for public. Later testing proved that instead connecting 5 or consoles is accomplished by connecting up to 16 official (some 3rd party might work, but most don’t seem to work) Game Boy Advance cables (1 per Game Boy needed) into a loop by connecting the violet end of the cable to next cable’s connection box’s connector (must finish the loop by connecting the 16th cable’s violet end into 1st cable’s box’s connector). After that connect gray end of the cable to Game Boy. To use the cable on Game Boy Pocket, Game Boy Light or Game Boy Color you must cut the plug a little so it fits. To use it on original Game Boy you must do the same cut and use additional Game Boy to Game Boy Pocket cable adapter.

A prototype of MIDI Maze was found for the Atari 8-bit family. It is possible to connect ST and 8-bit to a network and play together. See this site for details.