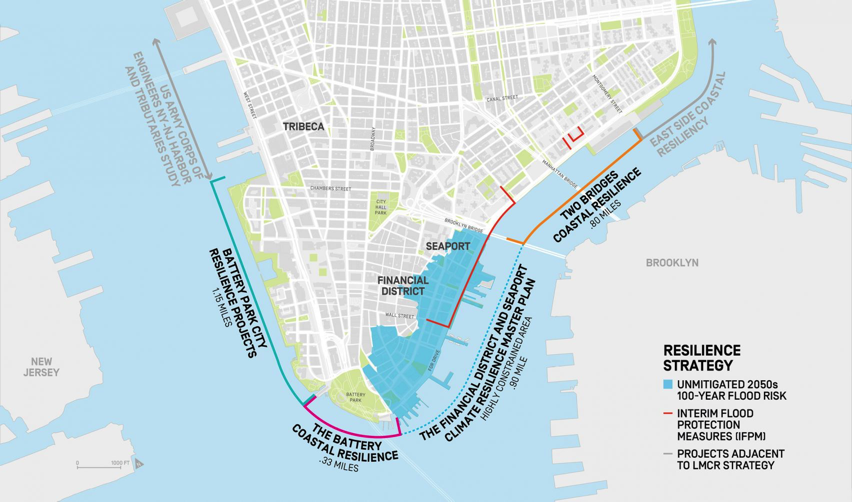 Very curious to see the final builds for this plan. Here are some neighborhood based details from NYCEDC (via dezeen):

The City is making targeted, ambitious investments that will deliver significant climate adaptation measures for key neighborhoods of Lower Manhattan:

In the South Street Seaport area, parts of the Financial District and Two Bridges neighborhoods, Emergency Management (EM) will spend $3.5 million to deploy a combination of just-in-time Tiger Dams and pre-deployed HESCO barriers by the 2019 hurricane season as temporary measures in advance of a permanent solution.

In Battery Park City, the Battery Park City Authority (BPCA), with $134 million in bonds, will reconstruct its esplanade and open space to adapt to new climate conditions. BPCA kicked off design in 2018 and will start construction in 2020.

In The Battery, NYCEDC, in partnership with NYC Parks, BPCA and the Battery Conservancy, will invest $165 million to elevate the wharf and esplanade and integrate a protective barrier such as a berm at the back of the park. This design will preserve the look and feel of the existing park while strengthening the shoreline. Construction will begin in 2021.

In the Two Bridges neighborhood, NYCEDC is designing an integrated flood protection system comprised of permanent barriers and deployable or ‘flip up’ protections that will protect view corridors and public access. DDC will manage construction of the $200 million investment, which will begin in 2021.