Yesterday, April 21st, was the 30th birthday of the Nintendo Game Boy handheld gaming system in Japan (released July 31 in North America and September 28, 1990 in Europe).

Nintendo’s second handheld game console, the Game Boy combines features from both the NES home system and Game & Watch hardware. The console features a green dot-matrix screen with adjustable contrast dial, five control buttons (a directional pad, two game buttons, and start and select), a 2-voice speaker with adjustable volume dial, and uses cartridges as physical media for games. The color scheme is  two tone grey with accents of black, blue, and maroon. All the corners are softly rounded, save for the bottom right, which is curved. At launch, it was sold either as a standalone unit, or bundled with the one of several games: Super Mario Land or Tetris among them. Several accessories were also developed, including a carrying pouch and printer.

The Game Boy received praise for its battery life and durability in its construction. It quickly outsold the competition, selling one million units in the United States within a few weeks. The Game Boy and its successor, the Game Boy Color, have sold an estimated 118 million units worldwide. It is one of the most recognizable devices from the 1980s, becoming a cultural icon in the years following its release. 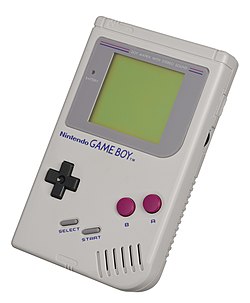 What games were available at release?

And even today, people are still working with the Game Boy:

Let us know your memories or current work on Game Boy in the comments below.

Here’s a 1989 commercial via YouYube